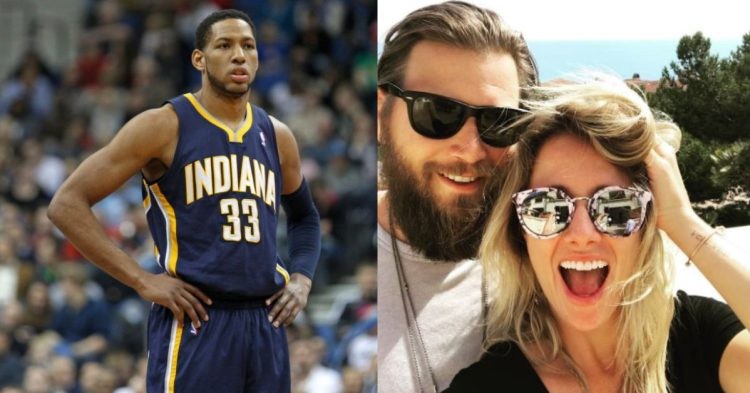 There haven’t been many other people to change the entire algorithm after a single day. It seems like comedian Brittany Schmitt can boast about her being able to do that since she has been trending for a while now. The biggest reason for that would be her show, where she revealed that she had an alleged relationship with a former NBA player.

It has been quite hectic for the NBA community since she mentioned that, as the expletive details Brittany mentioned were quite bizarre. Many believed it to be former Indiana Pacers star Danny Granger. Almost all of the fans believed that it was him, mainly because of his skin tone.

However, it turns out that it wasn’t the only interaction Brittany has had with the NBA over the years. Last year, Brittany shared another experience she had.

Could Danny Granger be the NBA player Brittany Schmitt cancelled on?

In an Instagram post, Schmitt wrote, “Six years ago, I had a pre-existing d***pointment planned in Portland w/an old NBA booty call for valentine’s day. Chris and I were only a few weeks into dating and I didn’t want to seem “too available” and cancel it.”

“I told him my predicament and he said ‘cool, see ya later’ he didn’t ask me to stay, but I’m glad I did anyway bc he now swears if I would have gone and played in the recyclables, that would have been the end. instead he took me on a picnic and I gave him h**d on a hillside and the rest is history. if you want a bomb a** husband, su*k d**k on a hillside. if that doesn’t work, i’m out of ideas. happy valentine’s day. this holiday isn’t real,” she added.

The 32-year-old comedian did not reveal who the NBA player was. But it may seem like it was in fact Danny Granger, considering the fact that they were allegedly in a relationship as well. But it can also be another player that Schmitt cancelled on to go on a date with her now-husband.

Moving on, Schmitt shares in an expletive manner about what she did after canceling on the NBA player. And together with that, she also “advices” others to do it if they want a “bomb a** husband”.

Moreover, Brittany posted it on Valentine’s Day last year as a note of appreciation to her husband Chris Rutkowski. Speaking of Chris, the couple are both comedians, but we do not know how they met. Since marrying each other in 2017, the pair have posted images with one and another on social media platforms on multiple occasions.