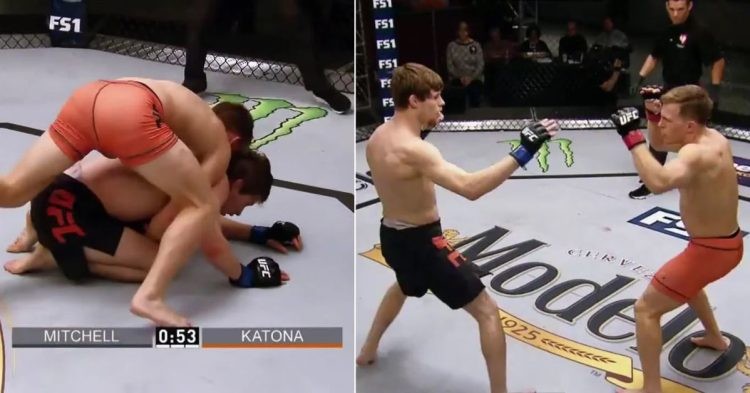 Bryce Mitchell vs Brad Katona at The Ultimate Fighter

Bryce Mitchell has emerged as one of the brightest prospects in the world of mixed martial arts. The UFC featherweight is cruising through the division and currently stands with a staggering MMA record of 15 wins and just one loss in his MMA career. He signed with the UFC back in July 2018 and raked in 5 straight wins since The Ultimate Fighter before dropping his first UFC loss in the form of a second round submission loss against Ilia Topuria at UFC 282.

While he may have only lost once in his mixed martial arts career, not many know that Mitchell faced a setback during his time at The Ultimate Fighter. The other loss of Bryce Mitchell’s MMA journey came in the form of a submission loss in his amateur career back in 2018.

Bryce Mitchell lost to Brad Katona at The Ultimate Fighter

Mitchell made his way to The Ultimate Fighter: Undefeated Featherweight tournament in 2018 with an MMA record of 9-0. Competing in just two amateur fights, Mitchell went 1-1 during his time at The Ultimate Fighter. The Arkansas native lost to Brad Katona via submission in the third round.

Katona would later go on to win The Ultimate Fighter featherweight tournament, beating Matthew Lopez in the finals. However, his UFC journey would remain shortlived after dropping back-to-back losses against Merab Dvalishvili and Hunter Azure. You can watch the fight between Bryce Mitchell and Brad Katona right here.

In a brutal back-and-forth affair between both the fighters, Katona secured a rear naked choke finish in the third round. Katona, who is a black belt in Karate used distance control to avoid Mitchell‘s takedown and even got the better of him on the ground on several occasions. Mitchell dominated the better part of the entire fight, dominating Katona both on the ground and on the feet.

In the third round, Mitchell was able to take Katona down, but found himself under an armbar attempt, forcing him to change his game plan. It was at this moment that Katona was able to secure Mitchell’s back and sneak in a rear naked choke to get the victory.

Bryce Mitchell suffered the first loss of his UFC career against Ilia Topuria at UFC 282. Topuria looked incredible on his feet, dominating the Arkansas native, leaving no chances for Mitchell to execute his game plan. Topuria was able to not just dominate the fight on the feet but also dictated his pace on the ground whenever the situation arose, eventually picking up a second-round submission win with an arm triangle choke to get the job done.