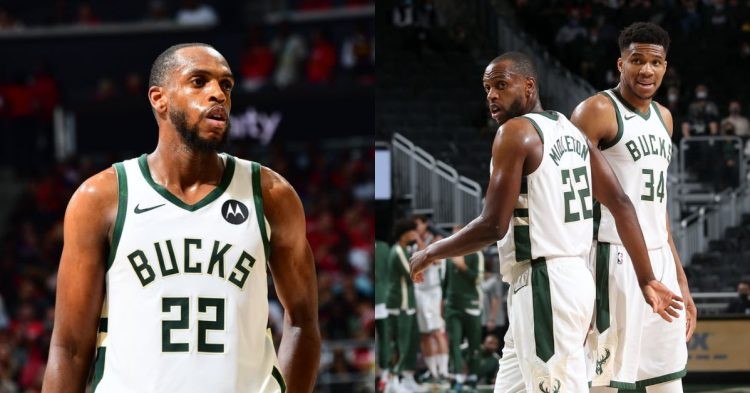 The Milwaukee Bucks have been having an exceptional season so far. Out of the 10 games, they have played, the Bucks have only lost one, to the Atlanta Hawks yesterday. Putting that aside, they have been the best team so far, winning 9. And it has been quite surprising that they have managed this without Khris Middleton. He has averaged 20.1 points, 5.4 assists, and 5.4 rebounds during the 2021-22 NBA season.

As we all expected Giannis Antetokounmpo has been the standout player for the franchise so far. He has been averaging a double-double in the 2022-23 NBA season, making 31.8 points, 12.2 rebounds, and 5.3 assists per game. He has been missing a key partner on the court in Khris Middleton, who has been out due to an injury for a significant amount of time.

How did Khris Middleton get injured?

The last game Khris played in the NBA was against the Chicago bulls in the 2022 NBA Playoffs. Unfortunately for him, Middleton suffered a major MCL sprain, which ruled him out for the rest of the season. However, during the summer, reports arose mentioning that he will be missing the beginning of the 2022-23 NBA season.

Milwaukee Bucks All-Star Khris Middleton is expected to miss the first few weeks of the regular season as he rehabs from offseason wrist surgery, sources tell @TheAthletic @Stadium. Middleton said at Media Day that he did not expect to play in the season opener this week.

The main reason for that would be the fact that Middleton had gone through surgery in his left wrist to fix a torn ligament. It was quite evident that the Bucks were not taking any risks with his health. They were sure to let him get enough rest to make sure Middleton was at his 100% when stepping on the court again.

Recently, the Bucks released a report that their fans might have been waiting for. According to Eric Nehm, the Bucks sent Middleton to the Wisconsin Herd to practice, together with MarJon Beauchamp.

Per the @Bucks: Khris Middleton and MarJon Beauchamp have been assigned to the Wisconsin Herd for today’s practice.

For context, the Wisconsin Herd is the G League team and is affiliated with the Bucks. It appears as if Middleton and MarJon were sent to get in a bit of a workout. Moreover, the Bucks have recalled them and are analyzing if they can be cleared for NBA action.