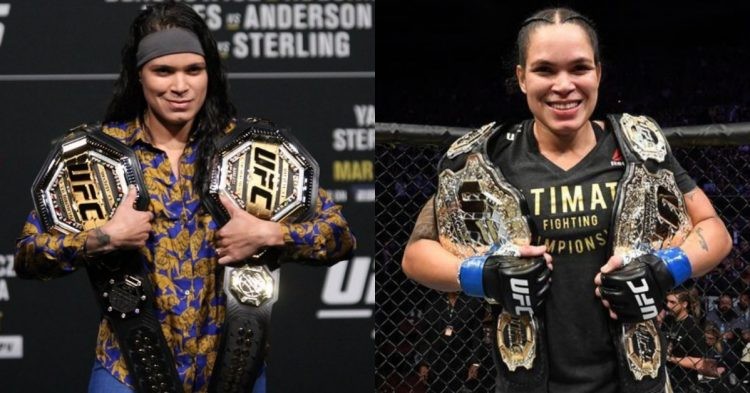 The undisputed greatest female Mixed Martial Artist of all time will be back in action this weekend. Amanda Nunes will take on Julianna Pena in the main event of UFC 277. The rematch promises to be a very intriguing fight as Nunes is looking to avenge her loss to Pena at UFC 269.

Circumstances were not ideal for Nunes heading into the first fight in 2021. Amanda was dealing with serious knee injuries before the fight. Recently, she revealed that the injury left her unable to continue training. Because of the injury, she could only work on her upper body.

She paid the ultimate price for it against Pena. Amanda powered through the first round on sheer willpower. But, unlike some of her previous opponents, Julianna did not buckle under the pressure and managed to survive the first round. It was a bad sign for Nunes, who did not have the proper cardio to last the entire 5 rounds.

More the second round progressed, it was evident that her movements were becoming more and more laboured. Pena sensed it and started applying pressure. Julianna’s jabs made Nunes back-paddle and ultimately she was too exhausted to fight back. It provided Pena with the perfect opportunity to take Amanda down and finish the fight.

In case y’all forgot, @Amanda_Leoa is ready to remind you why they call her the GOAT 🐐

Hence the rematch becomes very interesting to see. Nunes will be motivated to show that her last performance was nothing but a small bump on the road. So the fans can expect to see Amanda at her absolute best on Saturday. According to the betting odds, she is the heavy favourite to regain the title.

Why is Amanda Nunes called the GOAT of women’s MMA?

Amanda Nunes made her UFC debut against Sheila Gaff in 2013. Nunes got rid of Gaff in the first round as she earned a TKO victory in her first UFC fight. She followed it up with another TKO win against Germaine de Randamie. But she then suffered her very first UFC loss against Cat Zingano.

But, what followed, will go down in the history as one of the greatest unbeaten runs ever. From 2015 to 2021, Amanda Nunes had a 12-fight win streak which saw her becoming the very first female fighter to hold two UFC titles simultaneously.

She held both the 135lbs and the 145lbs title. So the achievement is enough to put her in the GOAT conversation. But what puts her over the line are the names in her resume.

At UFC 200, Nunes beat Miesha Tate to win the bantamweight title. In her next two fights, she beat Ronda Rousey and Valentina Shevchenko. She is also one of the only two fighters to beat Cris Cyborg and the only one to beat her via knockout. No other female fighter has accomplished more than what Nunes has managed so far.

Even though she lost to Pena in her last fight, the UFC President does not think it changes Nunes’ GOAT status. He has further stated that Nunes will remain the GOAT regardless of the result at UFC 277.

Will a second loss to Julianna Pena tarnish The Lioness’ legacy?

Regardless of Dana’s opinion, the fans may rethink their stance on Amanda Nunes’ position in the GOAT debate if she loses at UFC 277. For example, Cain Velasquez was briefly regarded as the best heavyweight fighter of all time. But his losses against Fabricio Werdum and Francis Ngannou have eliminated him from the conversation.

At featherweight, Jose Aldo was considered the greatest fight of all time. But the rise of Max Holloway and Alexander Volkanovski has spiced up the GOAT debate in that division. So, another loss to Julianna Pena may just sway the fans in some other direction. However, it will be incredibly hard to replicate Nunes’ success.

Even if Amanda can not get the job done this weekend, it does not take anything away from her pre-existing accomplishments. There is a saying in combat sports that ‘you are only as good as your last fight.’ But Nunes may be an exception to that rule. Nobody in the UFC is even close to having the record that Nunes has at the moment.

Although there can be some arguments made for the likes of Cris Cyborg and Valentina Shevchenko, neither have held two UFC titles at the same time. So Amanda Nunes will remain the GOAT for the foreseeable future.