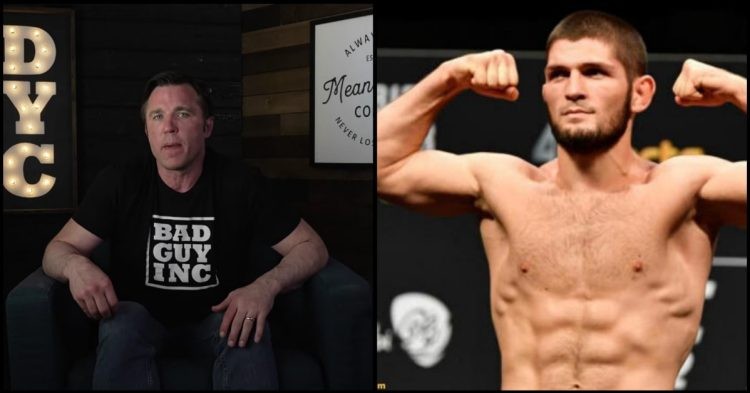 Can Khabib Nurmagomedov beat Chael Sonnen in a grappling contest? In a recent video on his YouTube channel, The Bad Guy contemplated a potential matchup between them. He also spoke about a lot of training ground myths regarding Khabib, which made Chael wonder whether the former UFC 155lbs champion can actually dominate him or not.

Chael Sonnen is much bigger than Khabib Nurmagomedov. During his fighting days, Sonnen mainly competed in the middleweight and light-heavyweight divisions in the UFC. However, he has also fought at heavyweight later in his career over at Bellator. Hence, it is needless to say that Nurmagomedov will be at a significant disadvantage if they clash.

But Khabib is no stranger to going toe to toe with grappling partners bigger than him.  He is a teammate of the former UFC heavyweight champion Daniel Cormier. On top of that, former 185lbs champion Luke Rockhold is also a part of his gym AKA. Hence, he has grappled with some of the best on the planet who are much bigger than him.

Recently, the footage came out of Nurmagomedov grappling Rockhold ahead of the latter’s return at UFC 277 against Paulo Costa. In the clip, it could be seen that Khabib was controlling Luke on the ground. He had Luke in side control and the middleweight was struggling to get himself free. Talking about it, Chael said,

“I could not do to Luke what Khabib did to Luke. I can tell you that. Luke Rockhold is a bear in the ground. He is an absolute bear…Luke is good, he’s really good not the ground. I could not hold Luke down the way Khabib did.”

“I could not reach part of his hand, I could not catch his wrist, I could not get to side control. There’s things I couldn’t do. Can Khabib whip my a**? He’s a 155 pounder, He’s too small, right? I can deal with Khabib, right?”

Many fans may not know this, but Chael Sonnen has his very own grappling promotion named SUG (Submission Underground). Is Chael Sonnen building a potential showdown between the two? Although Khabib is retired, he may not be opposed to grappling for fun.

FINALLY!!!
An MMA Event where you don’t have to mute the announcers@EagleFightClub
Commentary by
ME

The Eagle and Chael are already in a business relationship currently. Along with Henry Cejudo, Sonnen provides commentary for Eagle FC, which is a promotion owned by Nurmagomedov. Hence, the door is certainly open for Khabib to grapple Chael in an exhibition bout.

Do you think Chael Sonnen is hinting towards a future grappling match between the two? If so, can Khabib Nurmagomedov overcome the size disadvantage? Let us know in the comments down below.