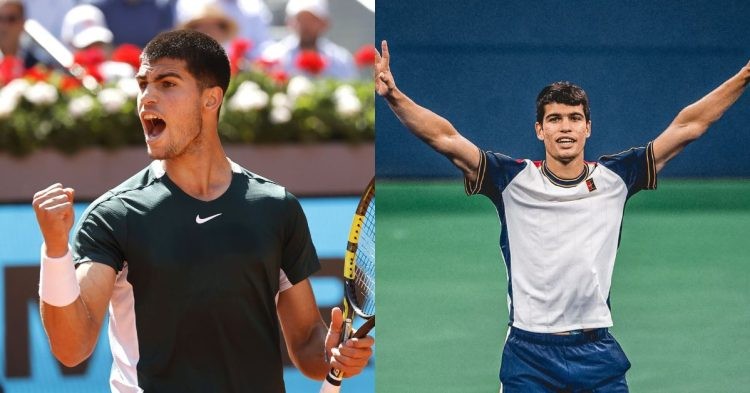 Carlos Alcaraz reached the final of another ATP tournament this year as he made it to the final of the Hamburg Open. He faced Lorenzo Musetti in the final but came short of winning the tournament. Musetti and Alcaraz gave a peek into the future of tennis as the two young prodigies played a nail-biting final.

Musetti was clearly the better player as he won the thriller in three sets. Alcaraz lost the first set 4-6 but saved match points in the next one to win the second set 7(8)-6(6). Musetti managed to break Alcaraz’s serve in the third set and won the match with the score 6-4, 6(6)-7(8), 6-4.

Despite losing the final, Alcaraz broke into the top 5 of ATP rankings for the first time. He will officially make it to the prestigious top 5 list at 19 years and 2 months. Exactly a year ago, Alcaraz was ranked 55th in the ATP rankings.

Since then, he has made it his habit to reach the final of ATP tournaments. Before the start of this season, he was ranked world number 32. Moreover, he made it to the top 20 in the second half of February. He made more leaps in the rankings to enter the top 10 at the end of April.

By breaking into the top 5 of ATP rankings, Alcaraz has become the youngest player to do so since Rafael Nadal. As per Sportskeeda, Nadal made it to the top 5 at 18 years and 11 months. Alcaraz and Nadal come from Spain and the young prodigy is touted as the successor of Nadal.

In fact, Nadal has himself called Alcaraz his successor and expects a lot from him. Earlier this year, Alcaraz reached the top 10 and was the youngest to do so since Nadal broke into the top 10 for the first time in 2005.

On his way to the top 5, Alcaraz has beaten players like Nadal, Djokovic, and Zverev and has won multiple ATP titles. Despite many young players coming up, he is the one that everyone is excited about.