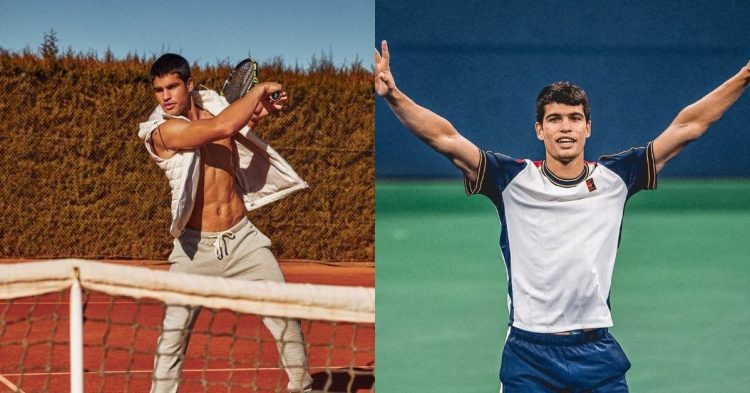 Carlos Alcaraz has been grabbing eyeballs for the past few months for his aggressive and impressive performance during ATP tournaments.

At such a young age, he has managed to break into the top 10. Some impressive tournament wins have helped him rise through the ranks to number 6.

Carlos Alcaraz is now sponsored by a well know brand of Spanish ham, which is quite amazing ahah. https://t.co/KxZMFMQa01

The company called Alcaraz ‘a breath of fresh air,’ in the tennis world. Moreover, it added, “His presence in sport at the highest level has allowed him to make a name for himself, showing that, despite his youth, he has everything to make history.” With the teenager gaining limelight and attention, ElPozo Alimentación has timed the collaboration at the best time possible. The company has realized the potential star power of Alcaraz in the future and joined hands with him ahead of its competitors.

The biggest testimony to the rising popularity of Alcaraz is the endorsement deal he has signed with Rolex. A deal with Rolex is a huge deal as Alcaraz will join players like Roger Federer, Greek player Stefanos Tsitsipas, and Spaniard Garbiñe Muguruza, who also have a deal with the premium watch brand.

Rolex also sponsors tournaments like the Australian Open, French Open, Wimbledon, and the US Open. Other than Rolex, Nike also has an endorsement deal with Alcaraz.

Alcaraz became the hottest sensation in the tennis world after he won back-to-back ATP tournaments before the French Open.

Firstly, he won the Barcelona Open with ease and then marched on to Madrid Open. It was in the Madrid Open that he made headlines. On his way to winning the tournament, Alcaraz beat big names like Nadal and Djokovic and finally beat Zverev in the final. He couldn’t replicate his performance in the French Open and ironically, lost the quarterfinal to Zverev.