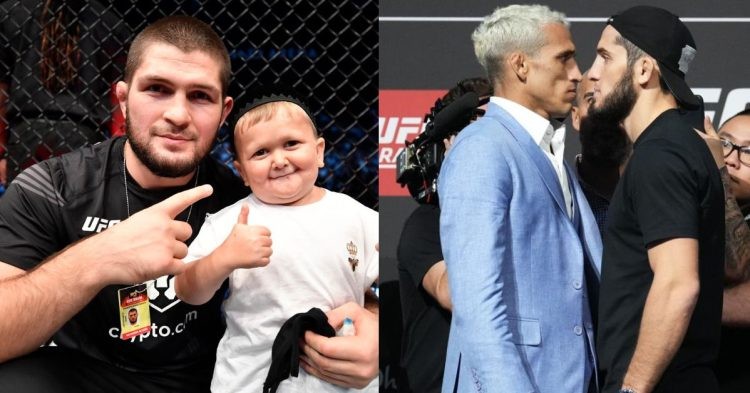 The biggest card of the year, UFC 280 will bring many stars to the Etihad Arena, Abu Dhabi. The main event between Charles Oliveira and Islam Makhachev is the most anticipated fight of the year in the lightweight division. And to watch the lightweight spectacle, many stars such as Leon Edwards, and Khamzat Chimaev will be in the building. But, fans are excited to see the new addition to UFC roster, Hasbulla Magomedov.

UFC president, Dana White recently announced that UFC has signed Hasbulla for a special role. As per reports, he will work with UFC to promote the sport and events by attending press conferences and fights. It is also reported that Hasbulla will earn more money than many UFC fighters without even getting into the octagon. Magomedov’s manager stated:

“We will not talk about the amounts in detail, but there they are such that many fighters do not get that much. Hasbulla signed a 5-year contract with UFC! No fights yet.”

However, Dana White did not reveal much about Hasbulla’s role in UFC and has decided to keep it a suspense. But, we do know what Hasbulla will do at UFC 280.

Hasbuall Magomedov will corner Islam Makhachev during his fight against Charles Oliveira. However, he won’t be allowed to enter the octagon in between the rounds.

In recent interview, Islam Makhachev has made it clear that Hasbulla will be sitting very close to the cage in Team Khabib’s corner.

“He is gonna sit close to the cage, you know Charles has four corners but I have five.”

It is needless to say that Hasbulla will be supporting Islam Makhachev to beat Charles Oliveira and become the new lightweight champion. He was also seen hanging out with Team Khabib during the training camp leading upto the fight.

Hasbulla’s net worth and UFC salary

Hasbulla has massive following on social media platforms. He is an internet sensation with over 3.8 million followers on Instagram. Reportedly, Hasbuall’s net worth is over $200,000.

Hasbulla Magomedov has been spotted enjoying many luxury cars such as Mercedes, BMW and Lexus. Even for UFC 280, Hashulla arrived in a luxurious Prosche.