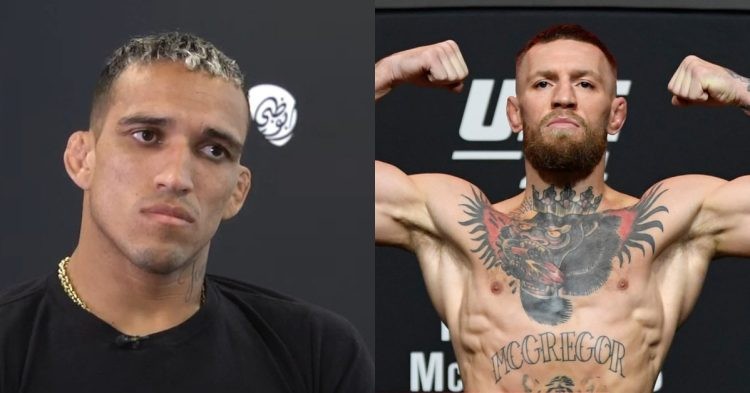 UFC 283 is scheduled to take place in Rio de Janeiro on January 23rd of 2023. Lightweight title contender Charles Oliveira wants to headline the card and he wants Conor McGregor to be his opponent!

Charles Oliveira will have the opportunity to regain his title against Islam Makhachev at UFC 280. Despite beating Justin Gaethje emphatically, Oliveira lost the belt as he did not make the championship weight limit of 155lbs. Hence, the bout against Justin became a non-title one for him. But he will now face Makhachev in UAE for the vacant belt.

Although Islam is perhaps the hardest opponent that Oliveira has ever been matched up with, Do Bronx is already looking ahead and planning for his future. In a recent interview with Brett Okamoto, on the ESPN MMA YouTube channel, Oliveira spoke about facing Conor McGregor in Brazil to kick off next year.

During their conversation, Charles made a very big confession. He stated the only reason he accepted the fight against Islam was to earn a chance to fight McGregor. He believes beating Khabib Numragomedov’s cousin will convince the UFC to book the bout between him and the Irishman.

“I like the narrative. It would be perfect. We’ve been asking for this fight ( against Conor McGregor) in Brazil so hopefully, it works out.” Oliveira continued, “I really do. That’s the sole reason why I accepted this fight (again Islam Makhachev). Well, I know the more victories, the better the chances. So this is a step towards that fight… Yes, I’d like to leave the Octagon already knowing who I’d be fighting next.”

Conor McGregor has a big history with the country of Brazil. Although The Notorious One certainly had bigger fights in his career, none was more important than his very first undisputed championship fight against Jose Aldo. The pair finally shared the Octagon at UFC 194. Conor knocked out Aldo in 13 seconds. But the lead-up to their eventual showdown was legendary.

UFC held press conferences in both Brazil and Ireland. But the Brazil one is particularly more memorable because Conor was at his absolute best on the mic and shredded Aldo to pieces. However, Charles does not think Conor doing the same in the build-up to their potential fight is a very bright idea. Brazilians are famous for the way they defend their own.

“I’d advise him to take very good care of what words he uses, especially when referring to me.”

Earlier, Conor McGregor’s manager confirmed that the 34-year-old is looking to return next year. Now Charles is also putting out the same statement that he wants to fight Conor next year in January if he wins against Islam.

Although it may be pure speculation, it seems like there is an unspoken deal between all the parties that Charles vs Conor will headline UFC 283 if everything else falls into place.