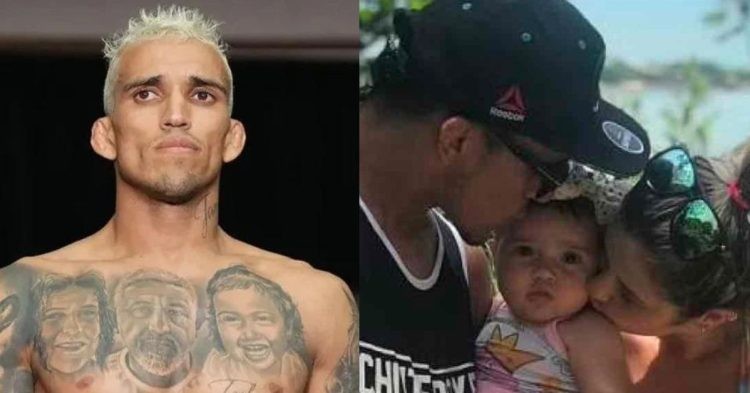 Charles Oliveira is the former UFC lightweight champion and #3 PFP fighter in the UFC. One of the most dangerous fighters with an exemplary record and win streak, Oliveira is one of the biggest draws in the UFC right now.

Previously, Oliveira had to forfeit his title due to missed weight. Despite beating Justin Gaethje at UFC 274, he could not lay claim to the title he won at UFC 262. As such, he will be extra determined to win it again when he takes on Islam Makhachev at UFC 280.

Currently, Oliveira holds the record for most submission wins in UFC history, along with the most post-fight bonuses in the company. Aside from his slender frame and shiny blonde hair, Oliveira’s tattoos are his most distinctive features.

Let’s try to understand the meaning behind Charles Oliveira’s tattoos and determine his reasons for having them.

Who are the people in Charles Oliveira’s chest tattoos?

On his left pec, Charles has a tattoo which is an adorable portrait of a smiling baby girl. The girl in the tattoo happens to be his daughter. Tayla was born to Charles and his wife, Talita in 2017 i.e. after three years of their marriage in 2014. Charles got this tattoo inked ahead of his UFC 262 fight that was against Michael Chandler for the vacant UFC lightweight championship.

Then, in March of 2022, Oliveira added portraits of his parents onto his chest as well. The 32-year-old made this incredible gesture as a sign of gratitude towards them for everything that they had done for him.

Who is Charles Oliveira’s wife? Apart from the close to dozen tattoos on his body, there is also another significant tattoo on Charles’ neck. This tattoo is the name of his wife, Talita Roberta Pereira.

Talita is from Brazil, Guaruja where she attended the Unaerp Guaruja high school. Pereira is publicly known as the wife of UFC fighter Charles Oliveria. Like her husband, she is also a Brazilian Jiu-Jitsu practitioner and often finds herself training/teaching at the Centro de Treinamento Charles Oliveira Gold Team.

As for her occupation, Talita currently works at Hospital Casa de Saúde Guarujá. Despite her husband being a high-profile fighter, she likes to maintain her family’s privacy.

Currently, Oliveira rides a division-best 11-fight winning streak and has secured finishes in each of his three title fights. However, he is faced with arguably his toughest challenge yet in Islam Makhachev, the protege of former champion Khabib. With his biggest fight at hand, Charles will be carrying his family with him on his skin as once again sets his sights on the lightweight title.