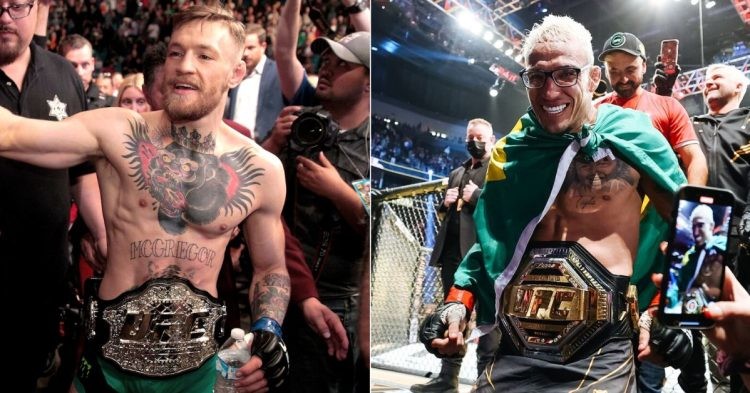 Former UFC lightweight champion, Charles Oliveira has teased a mega fight with Conor McGregor after his last fight against Justin Gaethje. Now Do Bronx takes on Islam Makhachev next with the UFC lightweight title on the line.

But, there is a big possibility of Do Bronx fighting Conor McGregor after UFC 280 if he comes out victorious in Abu Dhabi. Even though Conor McGregor is coming off two losses against Dustin Poirier he is still the biggest name in UFC. And McGregor is likely to get the title shot next because ohe is the biggest PPV star in the history of the sport.

This won’t the first time, UFC would be doing a huge favor to McGregor. McGregor won the lightweight title at UFC 205 with a win over Eddie Alvarez. Then he went on to box Floyd Mayweather and took a 2 year long hiatus before he returned to face Khabib Nurmagomedov at UFC 229.

But, UFC decided to not strip McGregor of his lightweight title amid his 2 year long hiatus. And thanks to Dana White’s controversial decision, The Notorious extended hsi title reign to 509 days, which is surprisingly longer than the title reign of Charles Oliveira.

Do Bronx had a title reign of 357 days before he vacated his title at UFC 264. Now it must be considered, that Oliveira won two title fights since becoming the champion he only has one title defense in his name.

Many fans were pissed that McGregor was allowed to hold on to his title despite his inactivity. Fans went on to point out the fact that McGregor has no title defense in his UFC career. Since his lightweight title win, McGregor has 3 losses and 1 win.

Conor McGregor is certainly rooting for Oliveira ahead of his title fight against Makhachev. The rivalry between McGregor and Nurmagomedov clan is still alive. And the Notorious would certainly prefer a title shot against Oliveira over Islam Makhachev.

Besides that, the former two divison champion has shown respect to Oliveira’s skillset in the past. For this anticipated title fight, McGregor has picked Oliveira to beat Makhachev easily, which will be opposite to Khabib’s prediction for the fight.

The Eagle has predicted that Makhachev will outclass Oliveira to win his first UFC title.