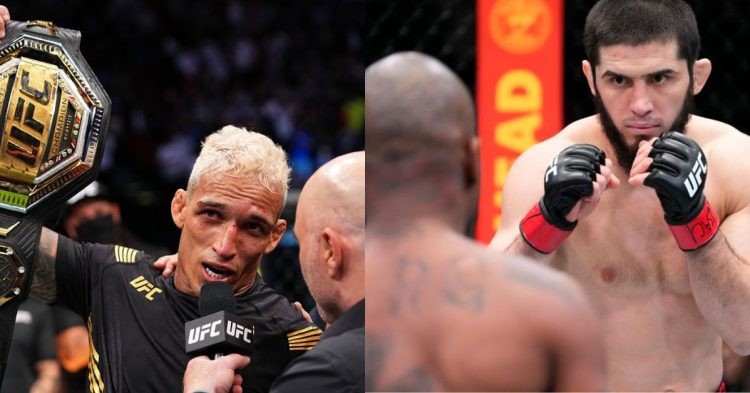 Charles Oliveira predicts a first round knockout of Islam Makhachev

Charles Oliveira is confident of his victory over Islam Makhachev at UFC 280. ‘Do Bronx‘ takes #4 ranked contender, Makhachev in an effort to win back his lightweight title.

Previously, Oliveira had to forfeit his title due to missed weight. As such, he will be extra-determined to win back the title he won when he beat Michael Chandler at UFC 262. Despite the fact he is somehow the underdog in this fight, Oliveira is not fazed by what lies ahead.

Speaking to Brett Okamoto, the former champ gives his prediction for the fight. “A knockout in the first round. I said that when I signed the contract. I’m going to show that I’m the best of the best. A knockout, I’m going to knock out Islam Makhachev in the first round.” Charles has been consistent with his prediction and is convinced that he possesses the tools to end Islam’s hype.

Currently, Oliveira rides a division-best 11-fight winning streak and has secured finishes in each of his three title fights. Most recently, he defeated former interim titleholder, Justin Gaethje with a first-round rear-naked choke at UFC 274 back in May.

Moreover, Charles also has one of the highest finish rates out of any fighter in the UFC, winning 9 fights by KO/TKO and 21 fights via submission. Without a doubt, the Brazilian is one of the most deadly fighters in the entirety of the UFC’s roster.

How is Charles Oliveira planning to beat Islam Makhachev?

However, Oliveira feels that Makhachev has holes in his stand up-up game and will be looking to exploit that. Having seriously hurt the likes of Chandler, Poirier, and Gaethje with his power, it’s no surprise Charles is feeling confident in his ability.

Moreover, Oliveira is expecting that the fight will go to the ground. He feels that he is the superior fighter when it comes to the ground game and has a long list of submissions to show for it. With fight night inching ever closer, what are your predictions for the fight? Who do you think wins this one and how? Leave your thoughts in the comments below.