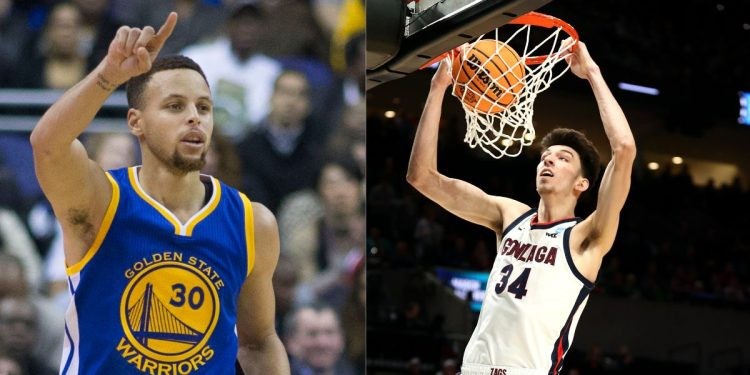 Steph Curry is considered one of the faces of modern basketball and the NBA. He revolutionized the game and is ranked 1st on the 3-pointers made list. Chet Holmgren is a hyped-up draft pick from the 2022 NBA Draft. It would interest many to know that he has a history with the unanimous MVP. He was asked about it in an interview leading up to the NBA Draft.

Holmgren attended a basketball camp organized by Steph. In it, there were several videos being shot. The most notable highlight from the camp was Holmgren crossing over Curry to get by him and scoring with a dunk. This video spread like fire and brought the young athlete a fair bit of fame. He discusses the experience in more detail.

Chet Holmgren has lots of respect for Steph Curry despite this

The name of the camp that Chet attended was called “SC30 Select Camp“. It featured the top high school athletes in the United States at the time. Chet deserves all the praise for pulling off his move on an NBA veteran. However, it is important to keep in the back of the mind that NBA players do not go all out in pickup games or games in camps they own.

Homlgren is listed at 6’9. Moreover, his wingspan makes him look like a 7footer. This means handling the ball should be difficult. Be that as it may, he was able to cross over Steph and dunk over the help defense. Additionally, he fell in a dramatic fashion after finishing the shot.

If you see the video clearly, Steph tried to prevent Chet’s drive. However, Chet skillfully dribbled the ball behind his back and went to the rim. Curry did not follow with an intention to block the shot or keep up. Additionally, one must wonder whether he would even be able to block Chet at the summit.

This should have fueled and inflated his ego. However, he responded with modesty when asked about the incident.

“I’ve answered that question a few times in the past but it was great you know.. a lot of great players there, Steph being one of them and it was a well-run camp you know altogether. From the practice and scrimmages to the actual game and event that was held at the end. You know it was a great experience overall. I got to play against a lot of great talent and learn a lot of things.”

There is not much doubt in people’s minds that Chet would have learned a lot at the camp. Therefore, him being a top pick is no surprise.