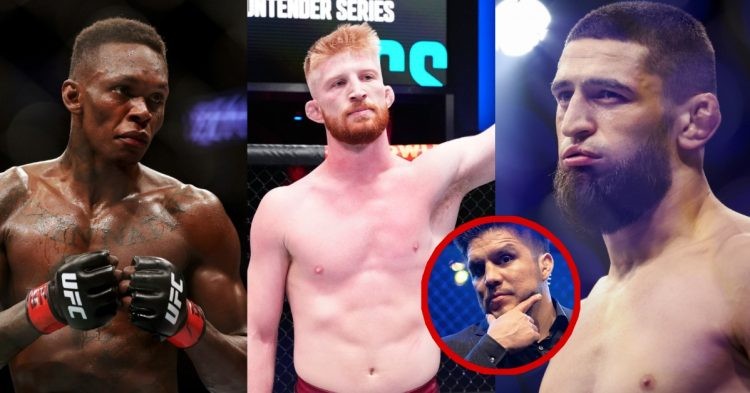 There is a new phenom in the town and his name is Bo Nickal. Only after two fights in Dana White’s Contender Series (DWCS), there is tremendous hype around him. Although Bo seemed to have decent striking, it is his wrestling that has created a lot of buzz about him. Following his last bout at DWCS, Nickal has built up a huge fan base and it includes Henry Cejudo.

After beating Donovan Beard via an impressive triangle at DWCS 56, Bo Nickal is now an official UFC fighter. It did not take him long to aim big as he called out Khamzat Chimaev right away. However, UFC President Dana White was not interested in the idea at all as Bo is only 3-0 in his career. On top of that, he is yet to make his debut on the UFC main roster.

Dana stated that there is obviously a development period that he needs to go through. It seems like Henry Cejudo agrees with the sentiment as well! Recently, Cejudo took to Instagram and broke down why he does not want to see Bo fight the top guys like Khamzat Chimaev or Israel Adesanya.

Triple C thinks Nickal is ready to become the champion right away! But the youngster should build up his skills before taking that step. According to Cejudo, Nickal can run through the division like a wrecking ball at this moment itself. But he may become even more dangerous if he takes the time to gather more experience under his belt.

“(Bo Nickal) is ready to compete with Israel Adesanya & Khamzat Chimaev TODAY, but that doesn’t mean he should,” wrote Cejudo on Instagram. “He needs to take his time, and learn something new with every fight. I made the mistake of fighting for a title too early into my MMA career. Bo will only become more dangerous in the sport over time. Either way, I don’t even think we should call him a prospect anymore. It’s not a matter of IF Bo Nickal is a future UFC middleweight champ, just WHEN!”

Khamzat Chimaev was the most feared wrestler in the UFC prior to the addition of Bo Nickal. His fights against Li Jingliang and Kevin Holland are just proof of what he is capable of on the ground. However, Henry Cejudo thinks Chimaev’s accomplishments are against lesser fighters. Hence, The Borz may not be able to repeat it against someone like Bo Nickal who has an illustrious background in amateur wrestling.

“Chimaev thinks he’s good in wrestling, His wrestling is nowhere near Bo Nickal. I can tell you that. He can take down these UFC guys that are, that have never wrestled, try taking Bo Nickal down. And 100% I could see Bo Nickal easily taking down Khamzat Chimaev.”

Now that Bo is officially in the UFC, there will be a ton of interesting potential match-ups available for him. Although he will not get the fight against Chimaev right away, Nickal will be tested against the likes of Jared Cannonier and Derek Brunson. But, Cejudo thinks Nickal can go up against Israel Adesanya and beat him without any further development.

So it remains to be seen how Bo Nickal performs. He has won his two DWCS fights in 62 seconds and 52 seconds respectively and both via submission. So Henry is not wrong when he says Bo is a tough fight for Adesanya. Can Nickal be the “future” of the UFC as Henry Cejudo claims? Only time will tell.