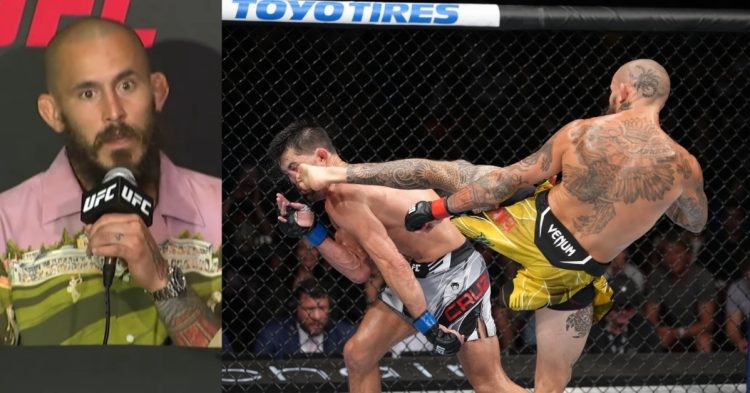 Chito Vera earned one of the biggest wins of his career at UFC San Diego. He beat Dominick Cruz via knockout in the fourth round of the fight. Following the contest, Vera had some harsh things to say about Cruz and stated that the 37-year-old fights at a very “low level.”

Despite the vicious knockout over the former two-time UFC Bantamweight champ, the bout was certainly a tough one for Chito Vera. As usual, Cruz’s foot movement was on point and it was proving hard for Vera to land on The Dominator often. Cruz landed a total of 92 strikes out of an attempted 249 strikes, whereas Chito only landed 61 strikes of an attempted 156.

However, Vera had a game plan and he stuck to it. As fans often see, Cruz has a very distinct style of fighting. His unorthodox foot movement is hard for many fighters to decipher. He has a very low stance while striking, to dodge punches. But it has cost him in recent times. Henry Cejudo landed a big knee while Dominick’s head was hanging low and handed him the first TKO loss of his career.

Against Chito, it was even more evident that Dominick’s style was outdated. While trying to escape Chito’s power punches, he hung his head low and was trying to circle away. But it provided Chito with the perfect opportunity to land the kick which knocked out Cruz for the first time in his career. The kick was so powerful that it even broke Cruz’s nose.

Following the bout, Cruz spoke about Dom’s fight stance and stated that it is not good enough to survive in MMA. Although it may be effective in boxing, for MMA, it’s poor.

“Honestly, me and my Team, we really think the way [Dominick Cruz] fights is very low level. There’s no base, there’s not a good stance, all that movement side to side… I Just believe his style is not the best style for MMA. Maybe for boxing it can work better, but for MMA, you’ve got way too many weapons going.”

“When he does well, he mixes takedowns with that movement, that’s when he’s successful. I was [thinking] it’s going to be hard for him to take me down. We were pretty confident, but we knew this fight wasn’t easy.” (h/t via MMA Fighting)

Was Dominick Cruz winning the fight against Chito Vera before the KO?

As mentioned above, Dominick Cruz’s strike output was significantly better than Marlon Vera’s. As opposed to Dom’s 92, Chito landed only 61 strikes. In round 1 of the fight, Cruz landed 21 strikes and Vera landed only 9 strikes. But it also included one knockdown. In rounds 2 and 3, Vera landed 19 and 21 strikes respectively. In those two rounds, Cruz landed more with 32 and 28 strikes respectively.

The 29-year-old only outstruck Dom in the 4th round where the stoppage occurred. Despite several knockdowns, Cruz was ahead in the bout in terms of total strikes. There was a notion amongst fans that Cruz was winning the fight prior to the stoppage. To some extent, it is true as Cruz was having success in out-striking Vera.

The three judges had the fight 28-29 for Cruz before Chito Vera knocked Dominick out in round 4. Hence, there was a chance that he would have walked away with the decision at the end of the fight. However, that was not meant to be as Vera secured the stoppage at the 2:17 minute mark of the 4th round.

What do you think of Marlon Vera’s comments? Do you think he is right to question Dom’s movement? Or is Dominick Cruz’s footwork still relevant in modern MMA? Let us know in the comments down below.