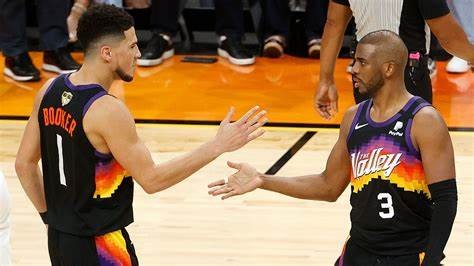 Chris Paul and Devin Booker have played vital roles in helping the Phoenix Suns get to the 2021 NBA Finals. The Suns lock horns with the Milwaukee Bucks as the two teams give it their all for the prestigious NBA Championship. So far the Phoenix Suns have been in the driving seat and they have a 2-0 lead in the series. Game 3 shifts to Milwaukee and the Bucks will be hoping to bounce back in front of their home crowd.

While Chris Paul and Devin Booker have been absolute superstars on the court, they have gone ahead to break an NBA Finals record set by none other than the Splash Brothers, Stephen Curry and Klay Thompson.

The Phoenix Suns backcourt has been out of this world. Chris Paul, Devin Booker and Deandre Ayton have put up stand out performances right from the start of the play-offs. Even though on paper, fans saw it close to impossible to break through the Big Milwaukee defence, Cp3 and D-Book have been driving in like hot knives through butter.

With all the success came the breaking of records. In 2018, The Golden State Warriors were up against the Cleveland Cavaliers in the NBA Finals. During the series, the infamous Splash Brothers set a record for most points scored by a duo in two games of an NBA Finals series. The record was set at 106 points. Chris Paul and Devin Booker have now broken the record in the 2021 NBA Finals with 113 points combined in the first two games.

Chris Paul and Devin Booker (113 combined points this series so far) have surpassed Stephen Curry and Klay Thompson's record for most points by a starting backcourt through 2 games of an NBA Finals over the last 50 seasons.

Curry and Thompson had 106 combined in 2018. pic.twitter.com/HNQwnWBvHf

The Phoenix Suns have also etched their name in the NBA History book. The Suns have become the third team in NBA history to make 20 or more three-pointers in one NBA Finals game. The list has two other championship teams, the 2019 Golden State Warriors and 2017, Cleveland Cavaliers.