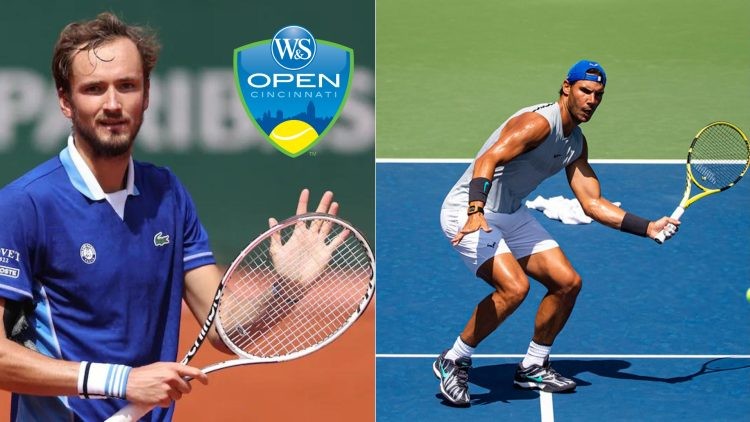 The Cincinnati Open has finally kicked off. This particular ATP 1000 Masters event is quite important since it would grant players the necessary game time before the start of the much-famed US Open.

Daniil Medvedev to defend his No.1 position at the Cincinnati Open

Medvedev’s No.1 position is currently hanging by the thread especially now that he suffered a shock second-round exit in Montreal against Nick Kyrgios. The Russian tennis star will need at least two wins in order to secure his ATP rank.

Medvedev currently has only one title this year in Ohio. He will be looking forward to displaying an impressive performance in Cincinnati and the US Open as well.

Rafael Nadal is currently ranked 3 in the ATP rankings and with Alexander Zverev out of his way due to an injury, Nadal is all clear to hunt down Medvedev for the famed World No.1 status.

One important point to consider is that this would be the first time for Nadal on the court since his abdominal injury in Wimbledon. If Medvedev fails to make it to the quarterfinals and if Rafael wins the title, the No.1 rank is his to take.

Carlos Alcaraz in pursuit of his third masters title in Cincinnati

Carlos Alcaraz’s trajectory has been on a rapid rise for a year. Same time around last year, he was ranked out of the Top 50 rankings of the ATP and currently, he’s comfortably in the Top 5 rankings.

Carlos has a very good record of 12-3 on the hard courts this season as demonstrated by his performances in the Miami Open. He would be aiming to win the title here and also have a title-winning run at the US Open.

In the past few months, Nick has displayed immense skill and he almost won his maiden grand slam title at Wimbledon as well, if not for Novak Djokovic.

The same goes for Tsitsipas. Nick recently clinched the Citi Open and defeated Medvedev in the Montreal Open as well. If both of these underrated tennis players manage to cut out on their inconsistencies, they would surely be a force to reckon with.