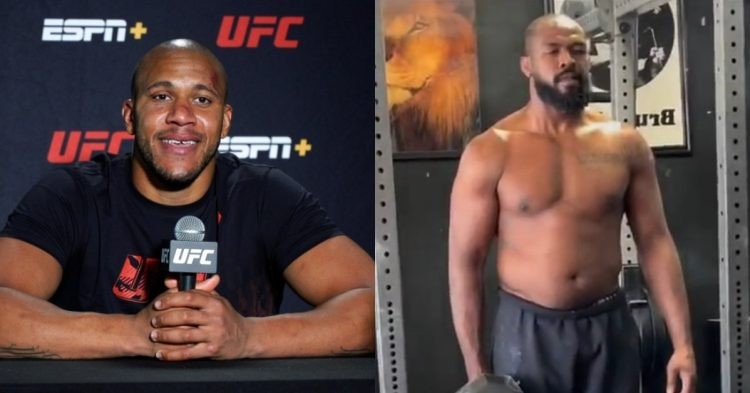 Former UFC light heavyweight champ Jon Jones is ready to take the next step in his career. After running rampant in the 205lbs division, Jones has his eyes set on the heavyweight division and is preparing himself for it. His coach Brandon Gibson thinks Jones is currently even stronger than Alistair Overeem, but Ciryl Gane begs to differ.

But former heavyweight title challenger, Ciryl Gane, does not think that is the case. Gane recently sat down for an interview with James Lynch. During their conversation, the topic of Jon Jones came up. When asked about it, Gane disagreed wholeheartedly. Gane does not think Jones is the strongest in a division that has Francis Ngannou in it.

“No, I don’t think so. The guy (Alistair Overeem) is stronger than Jon Jones. You can lift a lot of pound, you have like Francis Ngannou, this is something. No, (Jon Jones is) not the biggest fighter in the heavyweight (division). No, I’m not sure about that.”

Gane is set to headline the upcoming UFC Fight Night: Paris alongside Tai Tuivasa. Although Gane lost his last fight against Ngannou at UFC 270, a win against Tuivasa will put him right back in the mix for a title shot.

Jon Jones will make his heavyweight debut at UFC 282

Fans have been waiting for 2 years to see Jon Jones making his heavyweight debut. That wish will finally come true at UFC 282. Reports surfaced recently that Jon will make his return at the last PPV of the year. Although there is yet to be a confirmed opponent for him, it is almost guaranteed that his return fight will have some sort of title involved.

So far, the two rumoured opponents for Jon are Stipe Miocic and Francis Ngannou. If Jonny Bones ends up fighting Ngannou, it will be obviously for the heavyweight title. But, there are doubts about the possibility of the fight taking place, as the champ is still recovering from his surgery.

Hence the most realistic opponent for him is Stipe Miocic. It is rumoured that the bout will have an interim title on the line. Similar to Jon, Miocic has also been absent from the Octagon for 2 years now. So it will be interesting to see who can dust off the ring rust and perform to their best.