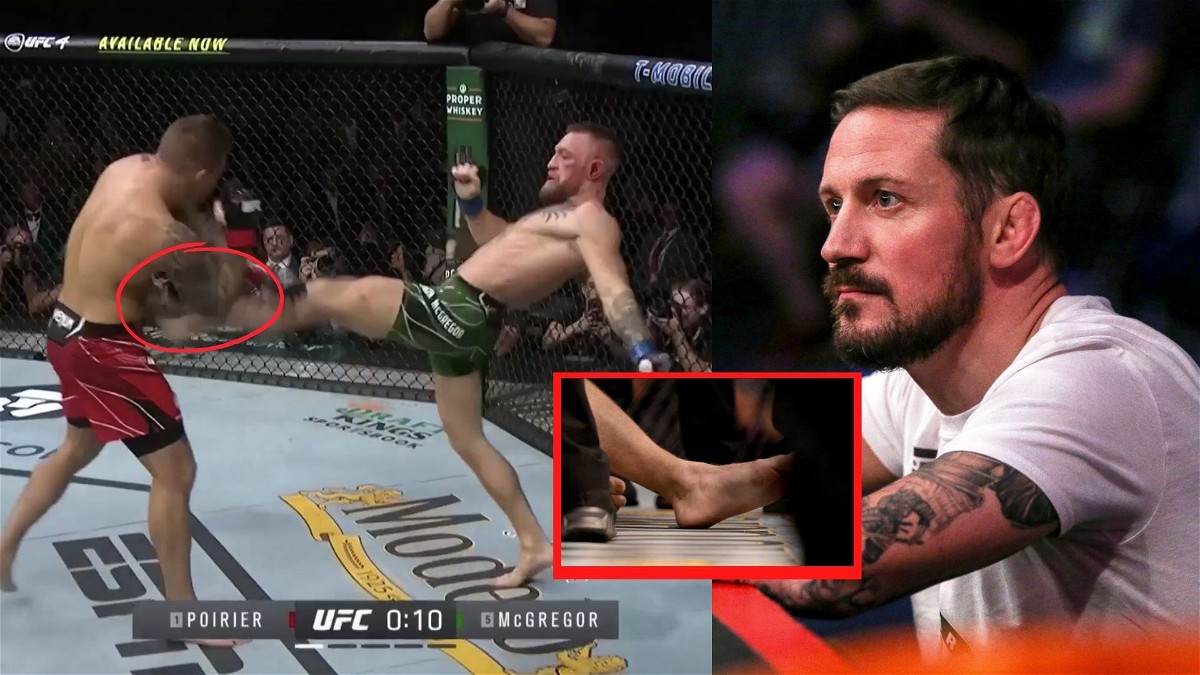 There were a lot of speculations about what led to Conor McGregor’s horrific leg injury against Dustin Poirier in the closing moments of the first round in the hugely anticipated trilogy bout at UFC 264.

However, after much confusion and speculation about how McGregor suffered the brutal leg injury, McGregor’s longtime BJJ coach John Kavanagh shed light on what went down which led to the leg break. In conversation with Laura Sanko, Kavanagh of SBG stated that it was Poirier’s elbow that initially fractured McGregor’s leg.

“He very aggressively threw that kick, Dustin shelled with the lead hand and the foot wraps around the knee in a similar fashion like poor old Silva and Weidman, they wrapped their shin around. He wrapped his shin around his elbow.”

“He stands back on it and you can see the bone almost protrude through the skin, I don’t know how he didn’t fall there, but he comes in then, the boat exchange crosses, they both miss with their backhands, he goes on to step back on it and that’s when it’s that horrifying food underneath.”

Earlier, Dustin Poirier had claimed that McGregor broke his leg at the beginning of the first round after he checked a leg kick. Poirier explained in the post-fight Octagon interview that he even pointed to McGregor in the middle of the exchange.

However, when McGregor was asked about the same sitting near the Octagon, he vehemently declined. “There were no checks,” McGregor said.

What went wrong for Conor McGregor against Dustin Poirier at UFC 264?

Also Read: “You Need People Like Me” – Conor McGregor Sends Out an Honest Remark Amid Huge Criticism After UFC 264

McGregor was able to land 8 out of 8 leg kicks while absorbing just a single leg kick from the Notorious. However, Poirier was able to land much of his significant damage while in the mound position. In its entirety, it was a fun first round, which evidently went to Poirier owing to the takedown.

Both the fighters were putting their everything into the fight, and if not for the horrific leg injury, it would have been a fun fight, one that would have revealed who is the better fighter, Dustin Poirier or Conor McGregor.

Also Read: Is Conor McGregor Retiring From MMA After the Horrific Leg Injury at UFC 264?