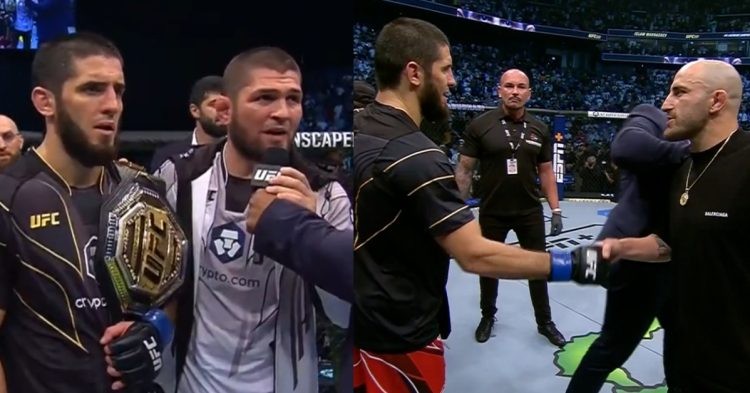 Charles Oliveira squared off against Islam Makhachev in a five-round main event bout for the vacant lightweight title that took place at UFC 280. Leading into this fight, both Do Bronx and Makhachev were on the back of impressive wins.

Both these lightweights are on an incredible run as the Brazilian lightweight was on an eleven-fight winning streak and Islam has not suffered a single loss in his last ten fights. It is needless to say that fans around the world were excited about this matchup as one of these lightweights’ streaks was going to end.

Speaking about this title fight, Islam Makhachev started the first round on a strong note as he stunned Oliveira with a straight left. Thereafter he landed a nice takedown and controlled the former champion for the majority of the round.

The Russian lightweight carried the momentum in the second round and started dominating Charles Oliveira with his striking. He landed many lethal combinations and hurt Oliveira. During one of the exchanges, Do Bronx attempted a flying knee and Makhachev was quick to counter it with a big right hook and dropped the Brazilian lightweight.

Thereafter Islam quickly controlled Oliveira on the ground and locked him in the arm triangle. Moments after the Russian lightweight locked in the submission, Charles tapped out.

Islam Makhachev ended Charles Oliveira’s eleven-fight winning streak in dominating fashion as he submitted him in the second round to become the new undisputed lightweight champion at UFC 280.

Following his title win, Islam Makhachev and his coach Khabib Nurmagomedov shared their thoughts about the fight in the post fight interview with Daniel Cormier. Islam dedicated the win to Khabib’s late father Abdulmanap and gave the belt to Eagle.

Thereafter DC asked Khabib what’s next for Islam Makhachev after winning the title at UFC 280. Nurmagomedov said that Islam who defeated Oliveira who was P4P #2 before the fight should defend his belt against Alexander Volkanovski next.

Makhachev vs Volk in Australia?!

“He finished Charles. Now our player fly all the way to Australia and fight pound-for-pound king Volkanovski.”

Soon after Khabib called out The Great who was in attendance at the Etihad Arena, he came inside the octagon and agreed to fight Islam Makhachev and shook hands with the lightweight champion. Do let us know in the comments section your thoughts about this title fight between Islam and Volkanovski.