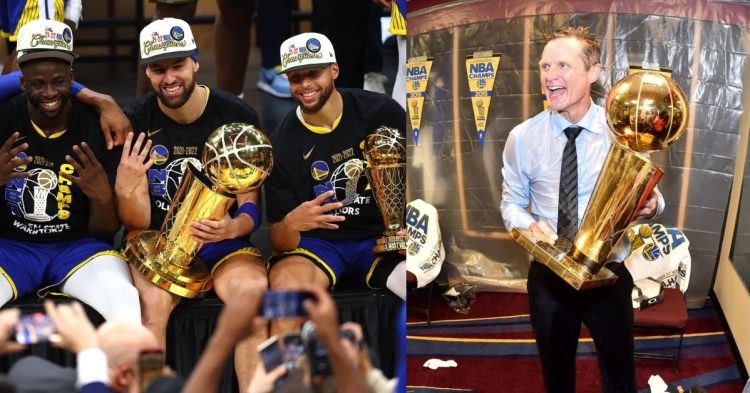 When we hear of the term super teams, the Golden State Warriors will mostly come to our minds first. The reason for that will be the amount of success they have tasted in recent years. This year, they won their 7th NBA Championship, after beating the Boston Celtics in the 2022 NBA Finals.

The finals against the Celtics was an eventful one for the Warriors. There were times when they struggled to beat Jayson Tatum and Co. But at the end of the day, GSW star man Stephen Curry came in clutch for the team. As did Andrew Wiggins, Jordan Poole, Draymond Green, and Klay Thompson. When you win a championship, the best way to defend it is to think of how to win it again. Warriors head coach Steve Kerr reveals the plans.

Kerr said on The Ringer NBA Show, “I think it would be an extension from last season but with the knowledge of how good we can be. Last year we had this plan to develop our young guys Wiseman, Kuminga, Moody, and Poole. We thought we can get back into contention for a title but we didn’t really know.”

Can the Golden State Warriors win their 8th NBA championship next season?

“We knew Klay was going to come back so we felt like we could do both and as it turned out obviously we ended up winning the title. So, this year is really an extension of that. We still need to develop those young guys because our older guys, they’re on the back nine now of their careers,” Steve added.

In addition to that, the former NBA star also spoke about the Warriors winning the title again this year. He said, “And the knowledge of, ‘Hey we just won a championship, we know how to do this.’ I think it gives us a little more confidence in the plan going forward that as long as we’re healthy and functioning well going into the postseason, we can do this again.”

As Kerr mentioned, GSW’s stars are reaching the later stages of their career. Most importantly, their trio of Steph, Klay and Dray are all reaching their 30s. It may still be early, considering the years athletes play in the NBA for. However, as a head coach, Kerr has to consider other options as well. To keep the success going, he would have to improve the young players on the team.

Players like Wiggins, Poole, Kuminga and a few others have the potential to play for one of the biggest teams in the world. But the franchise has to ponder whether they will be enough to keep the dynasty going. If they aren’t, the Warriors would have to improve them as Steve said, or replace them with better players.