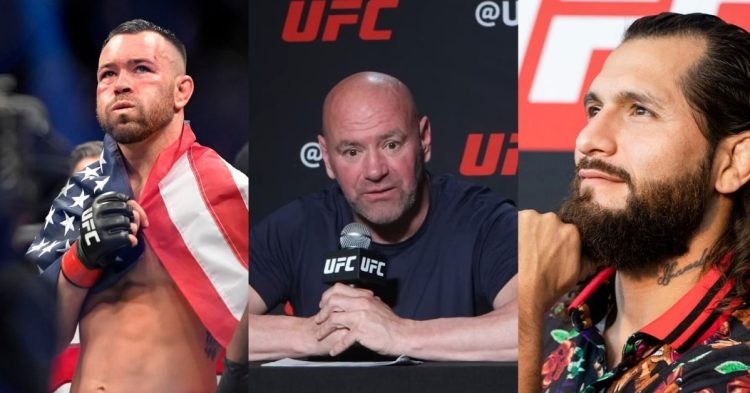 The UFC welterweight division is going through an exciting period of time. At UFC 278, it found a new champion in Leon Edwards and the outcome of UFC 279 will potentially determine the no. 1 contender for the belt. But that’s not all, Dana White reveals big plans for the division going forward.

One of the biggest names in the division is Colby Covington. He is coming off a dominating win over Jorge Masvidal at UFC 272. However, he has not been linked with a fight since then. But that is set to change as Dana reveals that Colby is in talks with the UFC for a return to action.

In a recent press conference, the UFC President stated that Covington is looking for a fight and the company is trying to arrange an opponent for him. However, he did not give any specific details about the plans.

It will be interesting to see who Colby Covington fights next. Almost all the big stars in the company are linked with other contests However, Khamzat Chimaev may just be a candidate for the bout. The Borz is set to fight Nate Diaz at UFC 279.

Chimaev was seen as the next challenger for the 170lbs belt if Usman had won against Leon. But it looks like UFC will give Usman a rematch against Rocky, possibly in the UK.

So that leaves Chimaev without an opponent if he wins against Nate in September. Dana previously stated his interest in seeing Colby and Chimaev go at it. This might be the best chance to book it.

During the same press conference, Dana White also provided an update on another massive welterweight fight. Very recently, reports came out that Gilbert Burns was all set to fight Jorge Masvidal in an upcoming event. But Masvidal put out a tweet and completely rubbished the claims.

However, there is some intrigue from Dana to make the fight happen. He had a hilarious back and forth with one of the journalists where it was evident that White was more than interested in seeing the fight.

Dana asked the reporter, “Yeah, I like it. You like it?” When the journalist replied that he loves it, the whole room erupted with laughter. Dana responded to it by saying, “Then I’ll do it.”

Both Burns and Masvidal are coming off losses to Chimaev and Covington respectively. So a fight between the two makes sense. On top of that, it will be an insanely entertaining contest to watch because of their style of fighting.