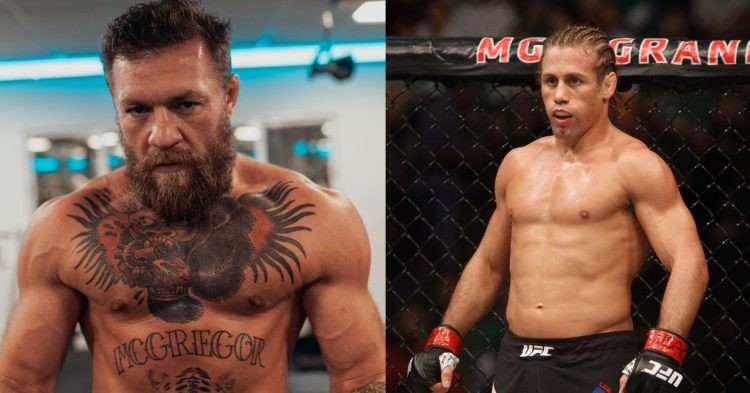 The Ultimate Fighter Season 22, Team McGregor vs Team Faber was arguably the most entertaining TUF season of all time. But unlike any other TUF season, we didn’t get to witness the two coaches square off in the middle of the Octagon.

In a recent training video posted by Conor McGregor on his Instagram, he and Faber were caught in a light-hearted conversation which proves that these former rivals are on good terms. Urijah Faber wrote a comment on McGregor’s latest training video saying “Was punching in the rules”, to which McGregor responded, ” I Gonna show up to your spot one day. For a munch”.

During their Ultimate Fighter days, both fighters had their career going in different directions. At that time Conor McGregor was the interim featherweight champion and was supposed to fight Jose Aldo in a title unification bout. Whereas Urijah Faber was a top bantamweight contender. Both fighters were one weight class apart and hence the fight never made sense.

But in the past, Faber has claimed that besides the weight difference, Dana White had offered him to fight McGregor. Faber said “Actually, a lot of people don’t know that I was offered a fight with Conor McGregor – the same fight that Nate Diaz got. And I was going to go up two weight classes and fight him on three weeks’ notice. Dana said he was going to give that fight to me, and Conor wanted Nate – and you saw what happened there,”.

It’s been more than a year since we have seen ‘The Notorious’ Conor McGregor inside the Octagon. Although it now seems like McGregor has fully recovered from the horrific leg break he suffered at UFC 264, there is still no clue about the date of his return. The latest update that McGregor is out of USADA’s testing pool adds to the various retirement speculations that have been going around lately.

Whether we will ever see McGregor back in the UFC is something no one can predict rather the man himself. But with his latest training videos, McGregor time to time hints at a bigger and better return of the ‘Mystic Mac’. A trend that can be observed in all of his training videos lately is that most of them are showcasing him working on his ground game. Wrestling or grappling has never been the strength of McGregor’s game and it seems like he is paying extra attention to it for his return.