Dustin Poirier Career Losses: Who Has Knocked Out The Diamond in UFC? 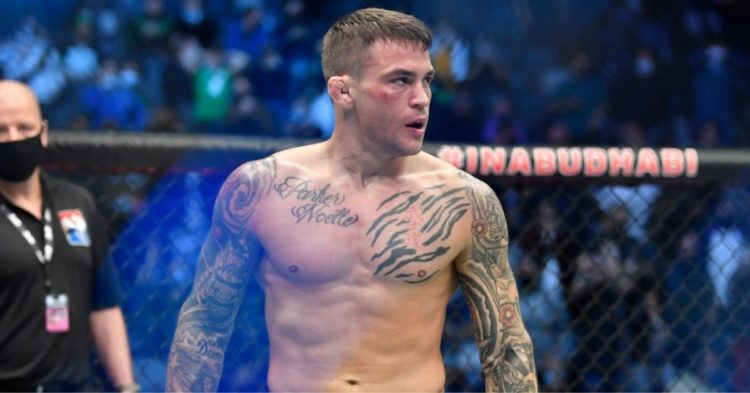 Being one of the toughest fighters in UFC Dustin Poirier has defeated some of the greats of the sport. He is certainly one of the most skilled fighters in UFC and has also put up many fights of the year contenders. However, the fighter has tasted defeat 6 times inside the octagon, of which he was only knocked out twice. Let’s have a look at both of his KO losses.

The KO against Conor Mcgregor

This was the first knockout loss in Dustin’s MMA career. Poirier was an established fighter by then in the promotion. On the other hand, Conor was gaining plenty of momentum as a future star. The bout took place at  MGM Grand Garden Arena, Las Vegas, Nevada. The first face-off between The Diamond and The Notorious headlined the UFC 178 main card on September 27, 2014.

On the fight night, Conor was more fluid and fast from the very beginning of the three-round featherweight contest. But, Dustin was looking basic. His footwork was predictable. However, Diamond tried to bring his ” Poirier uppercut” into action in the first-round of the bout. But The Notorious quickly escaped through it and started punching The Diamond in force. It forced the official to call the fight off. Within 2 minutes of Poirier’s first encounter with Conor, he got his first KO defeat. Following the loss, Poirier left the featherweight division and moved to lightweight.

The second and fastest KO defeat in his career came just when he was rising in the lightweight division. Poirier was entering Fight Night 94 on a four-fight winning streak; he had the opportunity to secure himself as a top-10 name by beating then #10 Michael. There was also the possibility of him vaulting into the title picture with an impressive win.

READ MORE-Lafayette Community Got it, That’s the Most Important Thing – Dustin Poirier Addresses Conor McGregor’s $500,000 Donation Ahead of UFC 264

The fight started slowly, with Poirier and Johnson checking jabs and kicks at one another. Neither of them landed anything notable and then all of a sudden, Johnson rocked Poirier during an exchange with a combination of right hook and straight left-hand counter. In the blink of an eye,  Dustin was on the ground and MJ was pounding the hammer fists. The ref called it off as quickly as he could and waved the fight off at 1:35 of Round 1.

Now, Dustin Poirier is going to fight Conor Mcgregor at UFC 264. Considering the style of both the fighters,  there is a high chance of a KO finish in the fight. However, it is only on July 10th we will get to know if Poirier gets his second KO of McGregor or Conor Stiffens Poirier again.