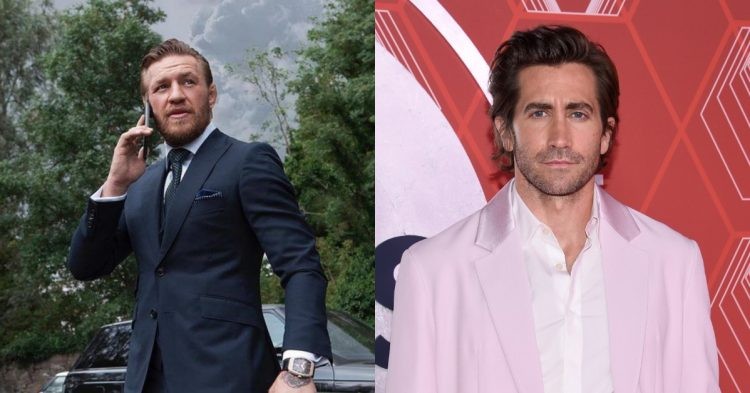 Conor McGregor will star with Jake Gyllenhaal in the 'Road House' remake. (Images via Twitter)

Conor McGregor is set to make his acting debut with a major Hollywood project. According to a report from Ariel Helwani, McGregor will star in the remake of an 80’s classic film ‘Road House.’ Along with Conor, the film will star Jake Gyllenhaal in the leading role.

The original movie starred Patrick Swayze, Sam Elliot and Kelly Lynch in the leading roles. It was an action film directed by Rowdy Herrington, which was released on 19th May 1989. The remake will be directed by Doug Liman who has made action movies like ‘Edge of Tomorrow,’ ‘Mr & Mrs Smith’ and ‘The Bourne Identity.’ Hence, featuring in a movie such as this is certainly a big achievement for Conor.

Helwani’s report also included a statement from McGregor’s publicist. It stated that Conor is more than committed to his fighting career. However, he is excited about exploring the world of Hollywood and getting started on the project.

“Conor McGregor is very excited to expand his storied career to Hollywood and join with Jake Gyllenhaal in this reimagining of “Road House”, a beloved classic. While fighting remains his top focus, this is the beginning of another successful venture in the McGregor empire. He is eager to get started filming.” (statement from Conor McGregor’s publicist Karen Kessler.)

Ariel stated that ‘The Notorious One’ will have a prominent role in the movie. Hence the fans can expect a more fleshed-out role for him instead of a glorified cameo.

According to a report from IndieWire, the movie is expected to start filming in August of this year in the Dominican Republic. But there is no word regarding a release date for the project.

Although Conor McGregor will make his acting debut with the ‘Road House’ remake, he already has multiple movies under development. The most prominent one out of all of those is the much-talked-about project with Jared Leto. Conor was seen hanging out with the Oscar-winning actor on multiple occasions recently.

He then tweeted that he would love to see Jared Leto starring in a biopic on himself. The actor also seemed intrigued by the idea. Other than that, He has a Netflix documentary which is scheduled to release sometime later this year. The documentary will focus on his recovery after his horrifying ankle injury at UFC 264.

The Irishman also released a documentary on his rise to the top of the MMA world in 2017, called ‘Conor McGregor: Notorious.’

Are you excited to see Conor McGregor in action on the big screen instead of an Octagon? Let us know in the comments down below.