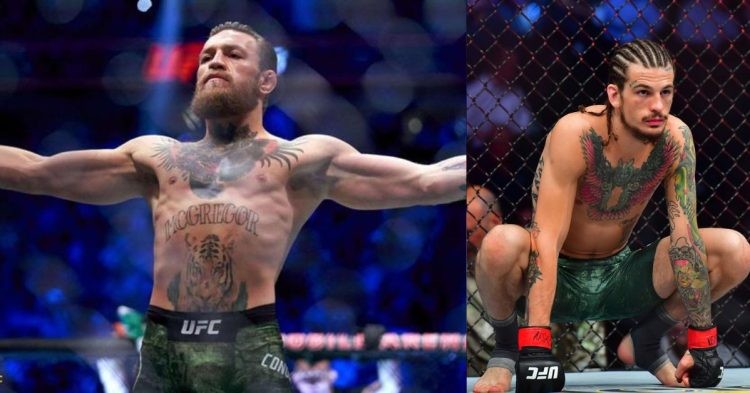 UFC bantamweight contender Sean O’Malley has declared Conor McGregor as the Greatest of All time. Sean O’Malley is scheduled to fight Petr Yan at UFC 280 later this month.

In one of his podcasts on his YouTube channel, O’Malley said “It’s crazy to look back on him, like when he first got in UFC, when he first fought Dustin Poirier. It just reminds you. It shows you. That’s why that motherf**ker is so big. Just his character at the beginning was so fun and entertaining. He’s the G.O.A.T,”. O’Malley further acknowledged the impact McGregor had on the sport, he said, “When it comes to who’s the G.O.A.T., who really blew up the sport, who really took it to the next level, who is the most entertaining, who captivated the most people, Conor is the G.O.A.T. And not even anyone really that close,”.

There is no doubt that McGregor was and still is one of the most impactful figures in the sport of MMA. 2013-2016 was the period when he was at his peak. He achieved almost everything in the sport. From being a bigmouth prodigy to the first fighter to ever hold two titles simultaneously. It’s not just about the accomplishments, but the impact he had on the sport, the number of fans he attracted, and the numbers he generated are unmatched. The Notorious Conor McGregor owns seven of the top ten biggest PPVs in the UFC and the top five all time. There is no bigger superstar than Conor McGregor in the sport of MMA, so you get where Sean O’Malley is coming from.

Conor McGregor could certainly be considered as the GOAT when we acknowledge the overall impact he had on the sport, particularly the UFC, but things change when we start considering skillset. No doubt McGregor was one of the best pound for pound fighters at his peak, but the argument that many come up with is that he didn’t do it for long enough. As of now McGregor has lost three of his last four fights, fighting only four times in the last five years.

Jones on the other hand is on a different level. The only loss he has is due to disqualification and  holds the record for the becoming youngest UFC champion ever. Though his resume is stained by few failed steroid tests you still can’t take away what he achieved inside the octagon and continues to do so with his latest move to the Heavyweight division.

Who is the GOAT, is a topic many fans and fighters like to debate but there is no clear-cut answer to this question.