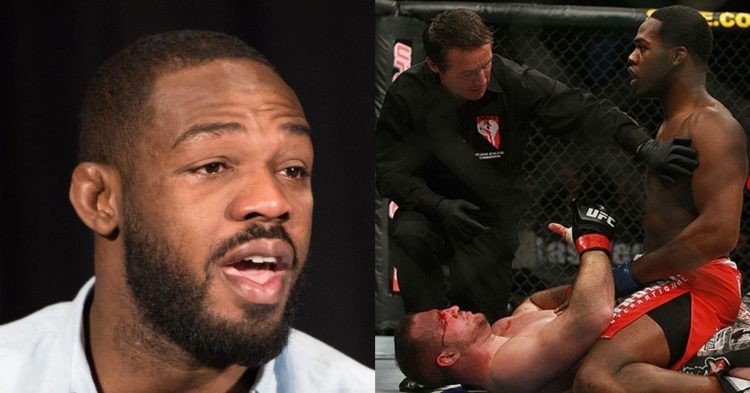 Former light heavyweight Jon Jones is one of the best fighters ever with an equally impressive resume in the UFC. Ever since he beat Mauricio “Shogun” Rua at UFC 128, all of Jones’ fights in the UFC have been title fights. And he also has the most wins in title fights in UFC history, with 14. However, Jones does have one blemish on his record. A solitary loss to Matt Hamill in his 4th UFC fight.

The bout against Hamill marked the first time Jones’ hand wasn’t raised after a fight in his 26-1 career as a professional mixed martial artist. However, calling this a “loss” isn’t technically correct. Jones’ physical superiority was apparent from the onset as he used his long reach to keep Hamill at bay. Hamill even attempted to unsuccessfully take down the future champion. “Bones” then managed to take down Hamill from the clinch in a typical fashion. After Jones had assumed top position, he began raining down a barrage of strikes onto Matt Hamill’s head. This included punches and some particularly vicious elbows. The fight looked very close to being finished as Hamill was defenseless against Jones’ onslaught.

However, when Steve Mazzagatti called off the fight, everyone seemed very confused. As it turned out, while he was attempting to end the fight, Jones had delivered a couple of illegal 12-6 elbows. This led to Jon Jones being disqualified and Matt Hamill being awarded the win instead. Many personalities in MMA have argued against the 12-6 elbow rule and said this fight should have been ruled a no-contest. However, the rules were in place before the fight and Jones did land an illegal strike. Hence, this “loss” will forever remain on Jon’s record depriving him of a spotless record.

Matt Hamill can claim something that no other fighter legitimately can. He can proudly proclaim himself to be the only person to ever defeat the arguable GOAT of MMA, Jon Jones. However, who else did Matt Hamill fight throughout his career? Well, Matt Hamill was a mainstay at 205 lbs fighting some of the very best contenders in that division of the UFC, even picking up some shocking wins.

Matt Hamill made a big splash in the UFC when he first joined, going on a 3-fight win streak. He defeated Seth Petruzelli and Jesse Forbes during this run. However, Michael Bisping stalled his momentum at UFC 75. He then bounced back with a KO victory over Tim Boetsch before losing to the former champion, Rich Franklin. Hamill would then embark on the best run of his career, racking up 5 consecutive wins.

These wins included the one over Jones and a unanimous decision victory over MMA legend Tito Ortiz. However, this fabulous run would come to an end at the hands of Quinton “Rampage” Jackson at UFC 130. He would then lose again, this time to the highly touted prospect, Alexander Gustafsson. With only 2 wins in his next 6 fights, 4 of which happened outside the UFC, Matt Hamill would call it a career. His final MMA bout was a split-decision victory over Chris Birchler at Maverick MMA 6.