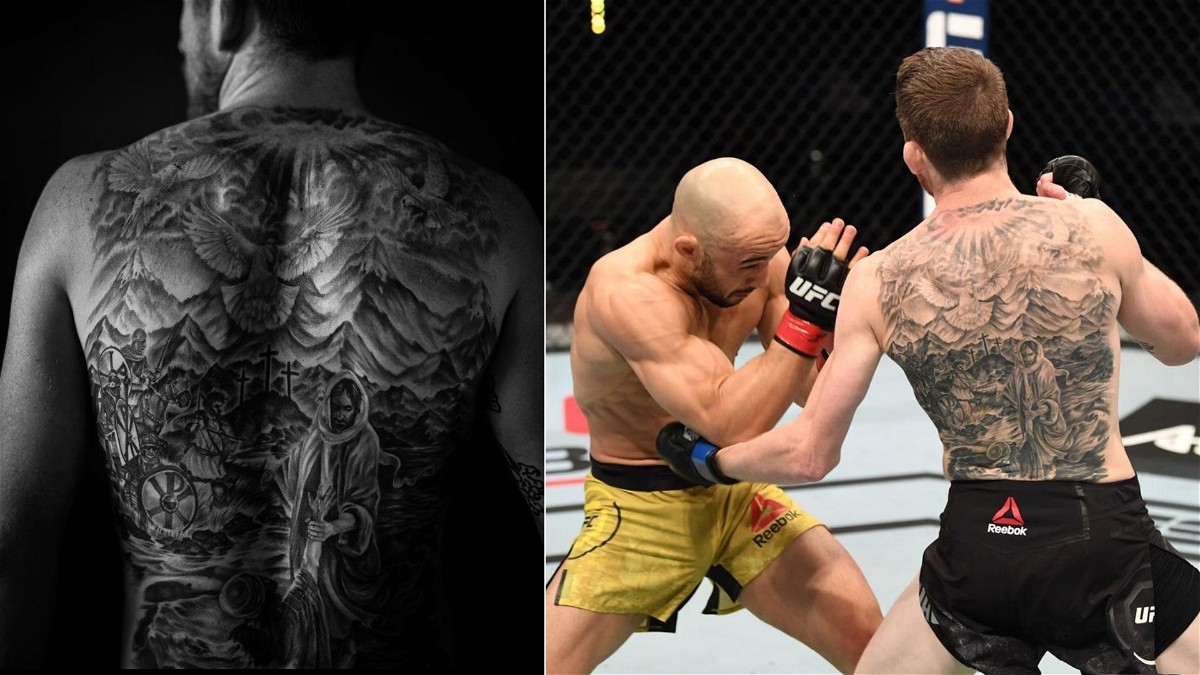 Cory Sandhagen is on the rise to become one of the biggest superstars in the bantamweight division of UFC. This is mainly because of his flamboyant attitude and aggressive fighting style inside the octagon. Needless to say, if he keeps on knocking out people in the future he will soon become the most talked about fighter in the promotion.

Sandman also has a very beautiful tattoo on his back. However, he has not opened up about the importance or meaning behind his back tattoo in public. However, he did shed some light on the meaning of the tattoo in a gist in one of the Q&A sessions with fans during his fight at UFC Fight Island.

“So that’s a religious piece. Although I wouldn’t consider myself religious of a guy anymore. It still holds special meaning for me. But it’s like a biblical Christian piece.” Sandhagen said about his back tattoo.

As a consequence, we have tried to decipher the idea about the meaning and significance of his wonderful back tattoo. Unlike most fighters who get a tattoo of their family members or their favourite mythical character, Sandhagen has a religious tattoo that consists of doves on the top portion of his back.

However, the upper portion of his back was not inked until 2018 as he had posted a picture from one of his fights. One can notice that only the lower back was covered with a tattoo. Whereas the meaning of the lower back is tough to decipher as it could indicate various things.

In another post on the photo-sharing platform, Sandhagen introduced himself as the “white, skinny guy with the back tattoo.”  Once again not really opening up on what the tattoo means.

Also Read: All the Tattoos on TJ Dillashaw and the Meaning Behind Them

As mentioned above Cory Sandhagen used to be a very religious person. Moreover, he is a very philosophical human being and has posted his views constantly on social media. 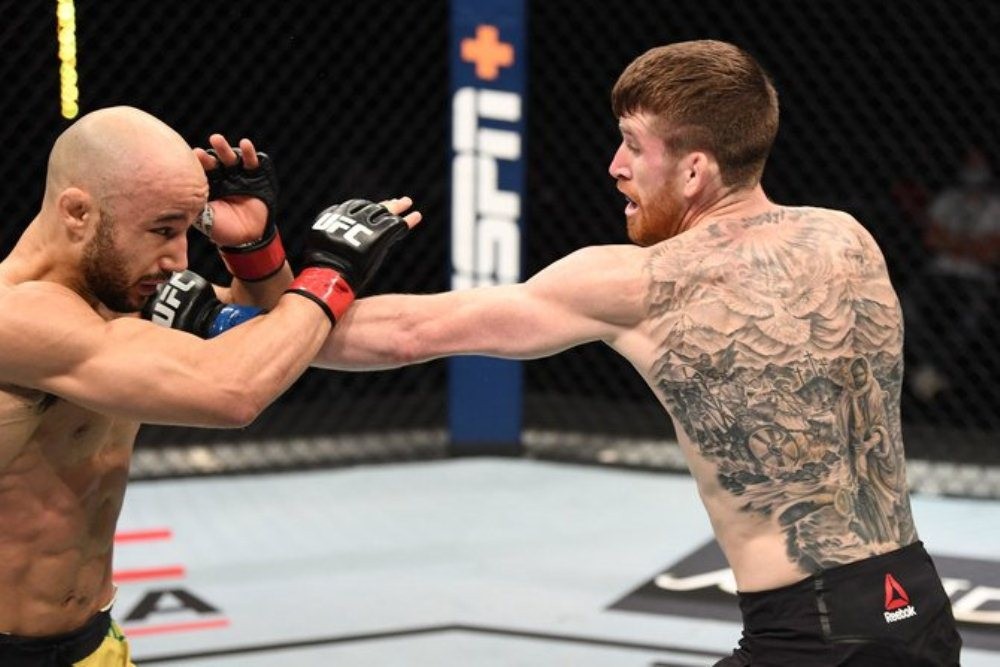 A couple of months after his emphatic win over Raphael Assuncao in 2019, Sandman posted a picture of his back tattoo. In the caption, the bantamweight contender was counting his blessings in life.

“With every success, I am reminded of this- and while I’m grateful I also face questions of guilt and the question of am I worthy of such blessings? It’s a strange thing to face- that as you get closer to the light, the more pronounced the shadow.

He has mentioned in one of his interviews that he loves Hinduism and has also expressed his wish about visiting the sub-continental country. “My girlfriend of about three years is half-Japanese, so we’d like to take a trip to Japan. I’m a big fan of the Hinduism religion, so I’d like to visit India too”

Moreover, we can confirm that he has knowledge regarding Indian culture as he had posted a picture of his tattoo with the caption “Tat tvam asi, friends.” This quote is from the Mahvakyas also known as the great sayings of the Upanishads. The words translates to ‘that thou art.’


Further, he has also mentioned that he has read books from Indian authors. “I have read a few books about Gandhi. And I am a really big fan of Krishnamurthy. Their works have left an impact on me.”

Therefore it is quite obvious that Cory Sandhagen is a very philosophical person who is interested in different religions and has deeply embodied himself with these values. Needless to say, the tattoo on his back reflects the same ideas.

Sandhagen has four tattoos on his body in total

Aside from the aforementioned enormous tattoo on his back, Cory Sandhagen has 3 more tattoos on his body in total. Sandhagen is one of the best boxers in the division. His crisp movement and efficient striking has troubled the likes of TJ Dillashaw and Petr Yan. He also has a tattoo of two hanging boxing gloves right beside his left leg.