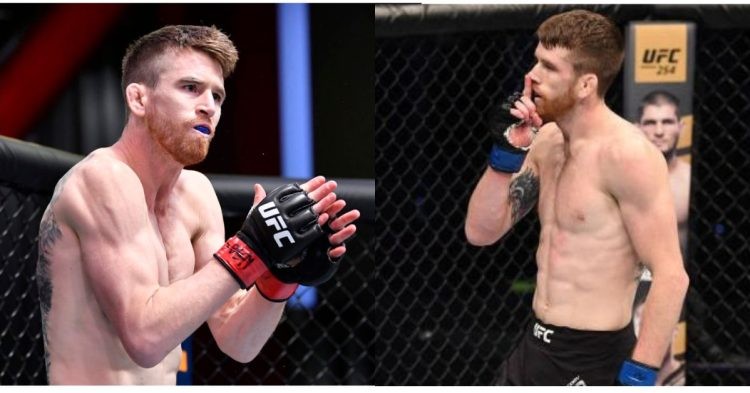 Cory Sandhagen is an elite striker who competes in the Bantamweight division of the UFC. Also known as ‘The Sandman’, he is one of the most entertaining fighters in the promotion.

Cory is known for his flawless striking, energetic movement, and brutal finishing. After making an impressive debut, he quickly made his way up the UFC’s rankings. However, ‘The Sandman’ suffered a painful defeat when Aljamain Sterling put him to sleep with a chokehold.

Fortunately for Sandhagen, he was able to make strong comebacks against Marlon Moraes and Frankie Edgar. In his fight against Petr Yan, he also showed a top-tier skill-set but he had to face a decision loss.

Today, we will look closely at the career earnings of Cory Sandhagen from his fighting career in the UFC. However, these are only estimated payouts as Nevada State Athletic Commission does not release fighter pay. This list only focuses on the disclosed pay that Cory has earned from his UFC career.

How Much Money Cory Sandhagen Has Made in the UFC?

Cory fought for the second time in that year against Iuri Alcântara on UFC Fight Night: Gaethje vs. Vick. In this fight, Cory earned $77,500 including $12K of base salary, $12K win bonus, $50K Fight of the Night bonus, and $3,500 for the fight week incentive pay.

Sandhagen suffered his first defeat against Aljamin Sterling in UFC 250. However, he still took $85K ($80K to show, and $5K from sponsorships).

The American hype train bounced back and got into the win column when he faced Marlon Moraes. In this bout, Cory made a solid $215,000 ($80K to show, $80K win bonus, $50K Performance of the Night bonus, and $5K fight week incentive pay).

Cory made the biggest money of his career when he fought Frankie Edgar. He earned a whopping $221,000. This includes an $83K base salary, $83K for the win bonus, $50K for the Performance of the Night, and $5K from the sponsorships.

‘The Sandman again fell on the losing skid after he suffered a controversial decision defeat against TJ Dillashaw. Cory earned $92K for this bout. This includes $86K to show and $6K for the fight week incentive pay.

In his last bout against Petr Yan in UFC 267, Cory again suffered a defeat after an impressive performance. However, Cory still walked away with a solid $182K which includes $100K of base salary, $50K for the Fight of the Night bonus, and $32K from fight week incentive pay.

Sandhagen’s total career earnings are around $1,157,300 so far. Sandhagen will hope to bounce back in the win column this Saturday when he faces Song Yadong in the main event of UFC Vegas 60.