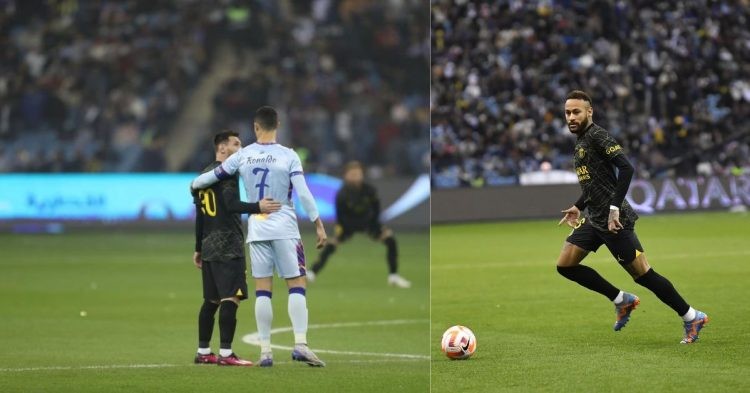 Two of the greatest soccer players, Cristiano Ronaldo and Lionel Messi, went head-to-head for probably the final time on January 19, 2023. The greats faced off in unfamiliar territory in Riyadh, Saudi Arabia. Messi represented his club Paris Saint-Germain while Ronaldo, an Al-Nassr player, played for the Riyadh All-Stars.

Their stardom was on show again, as according to Barstool Sports, “PSG’s YouTube Livestream lost 350k viewers in 10 seconds after Messi & Ronaldo were subbed off!”

The eagerly awaited match had fans on the edge of their seats since Ronaldo signed for Al-Nassr. There were rumors that Ronaldo or Messi might not turn up for the match because of some issues. However, both showed up and gave the crowd everything they wanted. The other stars including Neymar Jr. and Kylian Mbappe had to take the backseat as this was all about Ronaldo and Messi.

Both the players started the match and it was Messi who drew first blood in the third minute. He scored with a composed finish after Neymar Jr. played him through. Ronaldo was next to get on the scoresheet as he converted a penalty he earned.

PSG defender Juan Bernat was sent off for a last-man challenge after the equalizer, however, the French champions responded well by going ahead through Marquinhos. PSG got a chance to increase their lead but Neymar missed a penalty late in the first half. An ever-present threat, Ronaldo scored again to equalize for Riyadh in half-time stoppage-time.

So happy to be back on the pitch, and on the score sheet!! And nice to see some old friends!👍🏼 pic.twitter.com/qZqKGHsrVD

Goals continued to flow even in the second half. Former Real Madrid star, Sergio Ramos turned in a Kylian Mbappe cross to give PSG a slender lead again. However, Jang Hyun-Soo made it 3-3 as he scored with a near-post header from a corner.

A handball by Ali Al-Bulaihi gave the visitors their second penalty of the night. It was also their second taker, Mbappe, as Neymar was removed from penalty duties. The Frenchman expertly dispatched the penalty on the hour mark. It was his last contribution, as he was substituted shortly after. Teammates Messi and Neymar, as well as Ronaldo, were taken off just after the hour mark.

20-year-old Hugo Ekitike got on the scoresheet to extend PSG’s lead to 5-3 with a thumping finish. He scored after a lung-busting run from the halfway line. The frantic finish had one more goal in it as Anderson Talisca scored for the Saudis in added time.

“Why Are You Playing in This League?” – Lionel Messi Expresses Disappointment With Cristiano Ronaldo? Fans Try to Guess PSG Star’s Thoughts in Iconic Photo