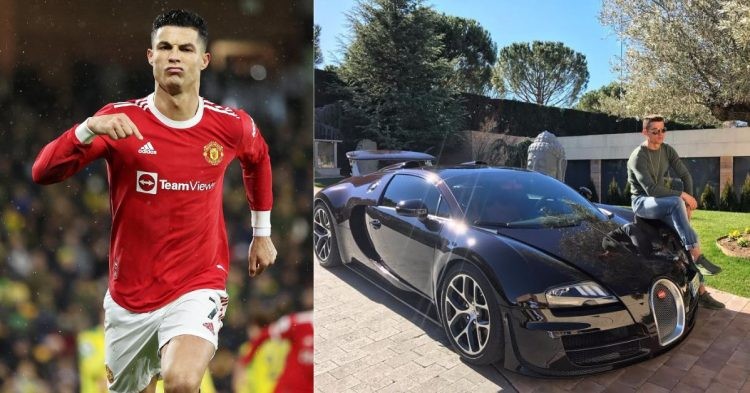 Football is one of the most popular sports in the world right now. The money it pays the players is truly astonishing. One of the richest footballers on the planet is the one and only Cristiano Ronaldo. He has built an empire off the field all by himself. From a huge collection of cars worth millions to his private jet, Ronaldo has it all.

Cristiano re-joined Manchester United last September and the world went into a frenzy. It was a move that United fans were waiting for all decade and it finally happened. Since then, he has helped the club generate staggering amounts of revenue with his popularity.

Speaking of that, Ronaldo is the most famous player in the sport. That’s not all. He is the most followed person on the biggest social media platform Instagram. As of August 2022, he has 477 million followers. He has raised his net worth mostly with the social media app’s help.

What is Cristiano Ronaldo’s net worth?

CR7 has a vast amount of wealth. He boasts many assets and investments in the biggest companies in the world. The former Real Madrid star has boosted his net worth to $500 million as of August 2022. Ronaldo’s net worth may not be the highest, but he does own the most number of assets among many other notable stars.

Cristiano has his brand known as “CR7“, which is one of the biggest brands founded by a sports athlete. The CR7 brand runs its own cologne, underwear, and clothing section. In addition to that, Ronaldo also holds investments in world-famous companies such as Apple and Volkswagen. He has also spread out his expertise by owning hotels in Portugal and Spain.

CR7 owns the Pestana CR7 Lifestyle Hotel. He runs the luxurious hotel with Dionísio Pestana’s partnership. The pair have opened different branches of the entity in New York, Lisbon, Madrid, Madeira, and Marrakech. The hotel’s official Instagram also indicated they will soon be targeting Paris and Manchester.

Apart from that, Ronaldo has made more than $1 billion in career earnings, according to Forbes. He touched that mark even before joining United in 2021.

The forward’s current contract pays him about £515,385 per week. He signed a two-year contract last year and he is on the same wage for the 2022-23 season as well. He makes about USD 30 million per year. Currently, Ronaldo sits in fourth place in salary earned, behind Neymar Jr, Lionel Messi, and Kylian Mbappe.

How much has Cristiano Ronaldo made from endorsements?

We all know Ronaldo is Nike’s biggest ambassador together with LeBron James. Both the athletes have a lifetime contract with the brand that pays them annually. However, it seems like Ronaldo will have the edge over LeBron in terms of money made from the contract.

Happy to announce I’m now a global brand ambassador for DAZN!
For my fans in 🇮🇹 🇩🇪 🇯🇵 🇨🇦 🇦🇹 you can watch an exclusive interview as a Juventus player on @DAZN_IT, as well as unlocking other great CR7 content!#DAZN #CR7 pic.twitter.com/Ysk5sm18xF

The five-time UEFA UCL winner signed the contract in 2003 when he took the football world by storm. His lifetime endorsement deal with Nike will mean that his earnings from the brand only will be more than a whopping $1 billion. No one would have made that much in the sporting world with just one contract.

Apart from Nike, Cristiano also has deals with brands like Herbalife Nutrition, Clear shampoo, Armani, Dazn, and many more. The exact number is unknown, but reports claim that CR earns about $50 million per year from endorsement deals alone.

If that wasn’t enough, the player also uses his Instagram page to advertise various brands. Although there isn’t an exact number, reports say that he is making about $1.6 million per sponsored post. It doesn’t come cheap to be featured in the most followed person’s Instagram profile.