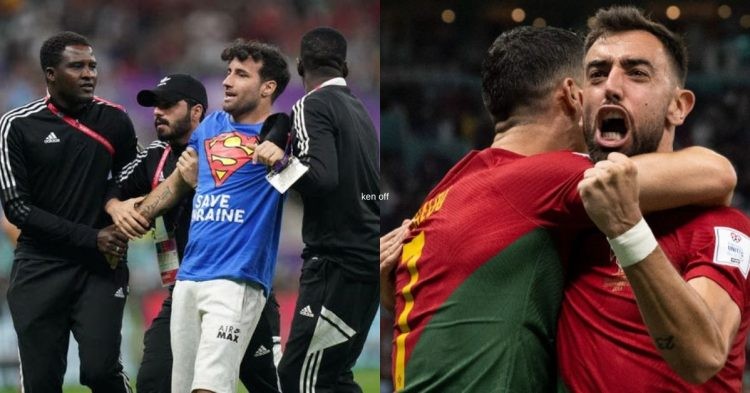 Cristiano Ronaldo has found himself in the eye of the storm again! Ronaldo’s controversial reaction to a pitch invader getting thrown out of the pitch has gone viral. During the group stage world cup match between Portugal and Uruguay, an LGBTQ rights activist invaded the pitch.

The activist was none other than Mario Ferri, a 35-year-old Italian activist, and a footballer. Ferri has made a name for himself by invading the pitch numerous times previously. Nicknamed ‘The Falcon’, Mario Ferri has been a professional footballer for more than nine years. He used to play for a second-division Indian club named United Sporting Club. However, after the pandemic, he moved back to his hometown Pescara.

Ferri invaded the pitch during the match between Portugal and Uruguay holding a pride flag and wearing a t-shirt with the words “Save Ukraine” and “Respect Iranian women” written on it. Although the demonstration was meant for a good cause, Portugal captain Cristiano Ronaldo didn’t look too pleased with the incident.

Cristiano Ronaldo is not particularly a fan of pitch invaders. Even more so, when it takes place during a high-pressure match in a world cup. Mario Ferri, the Italian activist invaded the pitch with a pride flag when Ronaldo’s Portugal was facing Luis Suarez’s Uruguay. Ferri was on the pitch for about 30 seconds when security officials rushed onto the pitch and tackled the activist and took him off.

Ronaldo, with a rather puzzled look on his face, seemed to wave goodbye to Ferri as the security personnel escorted Ferri out of the pitch. Ronaldo’s reaction was understandable as his side was looking to secure qualification to the knock-out stages of the tournament, and such an incident disturbs the flow of the match.

Mario Ferri releases a statement after the incident

Mario Ferri has finally released a statement via Instagram after last night’s pitch invasion incident. Initially, there was confusion about whether Ferri faced any charges or whether he was detained by the police. FIFA’s media officer of the game, Thierry De Backer, commented that he had “no idea” about what happened. Local Qatari organizers also refused to comment. Here’s what Mario Ferri said after the incident.

The World Cup pitch invader has spoken on social media after being released 🗣 pic.twitter.com/O2ybUZyVRA

This is not the first time that Mario Ferri had invaded the pitch. In 2010, Ferri was arrested for invading the pitch during a match between Inter Milan and Mazebe with the words ” Free Sakineh” on his shirt. This was a reference to an Iranian woman who was set to be stoned to death in Iran. In the 2014 FIFA World Cup in Brazil, Ferri invaded the pitch with the words ” Save Favelas Children” written on his shirt.

Earlier this year, Ferri traveled from Pescara to Poland to help Ukrainian refugees who had fled from Ukraine due to the Russian invasion.