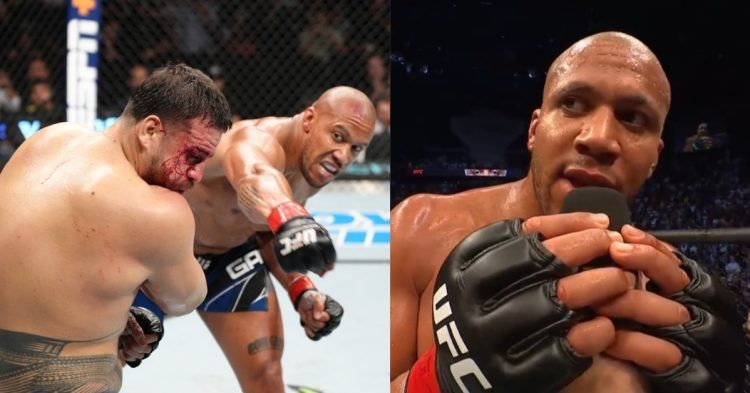 Former interim heavyweight champion Ciryl Gane headlined the UFC Paris event as he squared off against Tai Tuivasa in a five-round bout that took place at the Accor Arena in France. It is needless to say fight fans had their eyes set on this main event bout as these two heavyweights are the best in the business.

Leading into this matchup, Gane suffered a heartbreaking decision loss in the undisputed title fight matchup against Francis Ngannou at UFC 270. On the other hand, Bam Bam brutally knocked out Derrick Lewis in his last fight and secured his fifth straight knockout finish.

Despite his recent shortcoming, Bon Gamin who was fighting in front of his home-crowd was expected to outclass the Australian heavyweight. Subsequently, Ciryl Gane did not disappoint his fans as he put on a striking clinic and knocked out Tai Tuivasa in the third round.

Initially both the heavyweights maintained a safe distance and exchanged some good leg kicks. Later in the first round, Ciryl Gane used his superior height and reach advantage over Tai and landed some good combinations. However, Tuivasa did well to counter some of his shots.

The second round was wild with both Bam Bam and Bon Gamin coming extremely close to finishing the fight. Gane peppered Tuivasa with his jab and inflicted a lot of damage. But the Aussie heavyweight bounced back out of nowhere and dropped Ciryl with a right hook.

However, the French heavyweight landed some nasty body kicks and had Tuivasa on the ropes. The Australian heavyweight had not recovered from Gane’s body shots and Bon Gamin took full advantage of this and constantly attacked his body.

In the third round, Gane didn’t give Tuivasa any openings and mixed it up with his jabs and body kicks. Bam Bam was stunned several times and during one of the striking exchanges, Gane landed a nasty right hand and followed it with a barrage of punches to knockout Tai.

This fight was just as advertised as both heavyweights showed great heart and displayed some great striking. In the end, Ciryl stood tall and ended Tai’s winning streak.

Ciryl Gane completely dominated Tai Tuivasa from start to finish and secured an emphatic knockout win in the main event of UFC Paris. Despite getting knocked down twice, Bon Gamin overcame adversity and bounced back strongly to finish Bam Bam.

“No matter who Dana, Please I want that belt. I want the belt. That’s all I want, I want the belt,” said Ciryl Gane while having a conversation with Michael Bisping.

It would be interesting to see what UFC President Dana White has to say after watching Gane’s hard-fought win at UFC Paris.