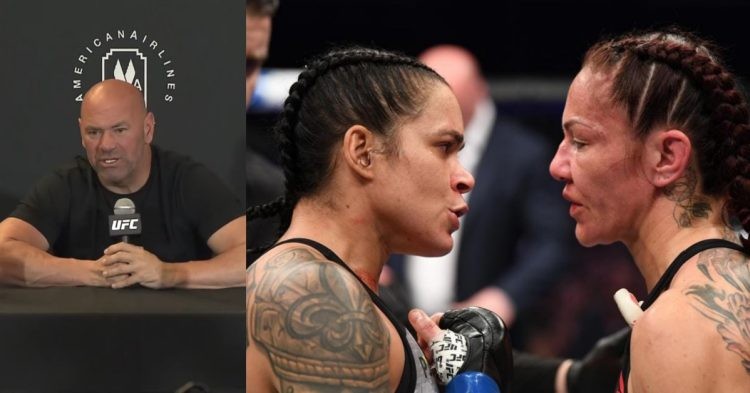 UFC President Dana White gives his thoughts on the rematch between Amanda Nunes and Cris Cyborg. From what he had to say, It does not look like the Nunes vs Cyborg 2 is about to happen any time soon.

Amanda Nunes fought Cristiane Justino aka Cyborg at UFC 232 for the women’s featherweight title. The contest was a wild 51-second thrill ride that ended with Nunes knocking out the seemingly invincible Cyborg. With the win, she became the very first female UFC double champ in history.

Although there were talks of an immediate rematch between the two, it never happened. Then Cyborg was released from the company after putting out an allegedly doctored video of Dana. Currently, she is the Bellator featherweight champion. Nunes, on the other hand, still holds both the 135lbs and 145lbs titles.

The lioness recently defeated Julianna Pena in the main event of UFC 277. It was a history-making performance and the fans are curious to know what is next for her. In a recent press conference, Dana White was asked about the possibility of Nunes facing Cyborg once more inside the Octagon. For the hopefuls, Dana’s words did not provide any encouragement.

He also stated that Cyborg sent him a text on his last birthday to wish him. Although their business relationship did end on the best of terms, Cyborg still wished Dana a happy birthday.

“Why? Who is talking about that?” Dana White further added, “I mean Amanda absolutely dominated Cyborg. The Shevchenko fight makes way more sense. And I’m not just sh***ing on Cyborg cause we’ve had history. To be honest with you, I usually don’t talk about this sh*t publicly. You know how I always say, I don’t tell you guys anything. But she actually text me and wished me a happy birthday. You know for my birthday.”

“So it’s not like Cyborg and I hate each other. And I’m not trying to discredit her. I wish her the best in whatever she’s doing. It was nice of her to send me a birthday text. So I just wanted to reiterate that I’m not sh***ing on Cyborg.”

What is next for Amanda Nunes after UFC 277?

It is now safe to say that Cris Cyborg will definitely not be the next opponent for Amanda Nunes. However, Dana White did drop a big hint about her next possible opponent. Other than Cyborg, the most talked about contender to fight Amanda is the current UFC Flyweight Champion Valentina Shevchenko.

Although White was not quite convinced by the idea previously, he does seem intrigued about the possibility. It may just be the perfect opportunity to book the trilogy fight. They had two fights previously and Nunes walked away with the win in both of those. But the bouts were certainly close enough for the fans to demand a third one.

Amanda expressed that she does not want to retire just yet and wants to continue fighting and defending both of her belts. On the other hand, Valentina has cleared out most of the flyweight division and is in search of a new challenge. She now wants to move up and face Nunes for the first time to become only the second woman to hold two UFC titles simultaneously.

Who do you think Amanda Nunes will face next? Is Valentina Shevchenko the right opponent for Nunes’ next fight? If not, who do you want to see her face next? Let us know in the comments section down below.