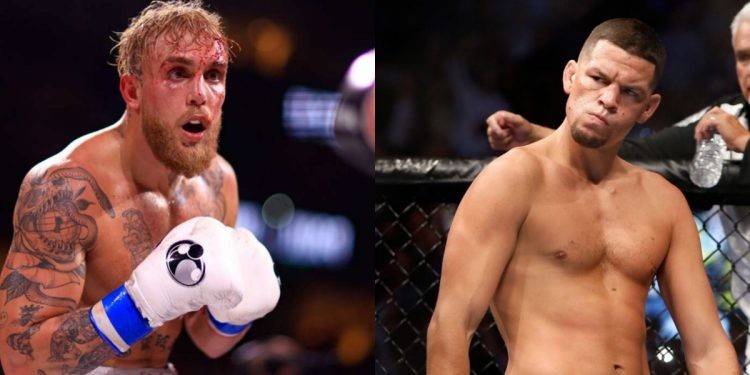 Jake Paul has an offer to fight Nate Diaz. (Images via Twitter)

First Mike Tyson and now Nate Diaz, it looks like stars are lining up to fight Jake Paul. Nate has been very frustrated with his contract situation with the UFC. Although he has been very adamant about leaving the company, Diaz is still under the UFC contract

But it seems like that situation is about to change as the UFC president Dana White himself wants Nate to pursue ventures outside of the UFC. During a recent interview with The MacLife, White essentially called Nate an inconsequential fighter in the welterweight division. He brought up Nate’s poor record in recent years and stated that the Jake Paul fight is perhaps the better option for him.

But he did not clarify whether the younger Diaz brother will be free from the contract or not. Although the prospect of the UFC being a co-promoter for the Diaz-Paul fight seems slim to none. Paul is currently under contract with SHOWTIME. But Dana does not share a good relationship with the company, especially after their joint venture to promote Mayweather vs McGregor in 2017.

So the most likely outcome seems to be the termination of Nate’s contract. But the 37-year-old is not impressed with how much time the process is taking. Nate once again sent out a tweet, asking for his release. He teased the Jake Paul fight in the tweet as well.

Jake Paul wants to fight Nate Diaz in the UFC

Although Dana White sounded open to letting Nate Diaz go, it can also be a public negotiation tactic. Despite insinuating that Daiz does not hold value to the company, Dana knows how big of a draw the younger Diaz brother really is. Hence, the release may not be as imminent as the fans think it is.

But, in case Diaz gets his contract terminated, the bout can take place this year itself. By the looks of it, Jake Paul is also down to fight Diaz. But he wants the bout to take place in the UFC itself. In a recent tweet, Jake expressed his wish to be Nate’s last opponent. He even wants to fight without any compensation. But Jake has certain conditions. He wrote,

Dana – I’m happy to be Nate’s last fight in UFC. You know the terms: pay fighters more and give them healthcare.

Sweetener: I will fight for free. https://t.co/fhj6Ig9bS2

The bout will almost certainly take place inside a boxing ring, rather than the UFC Octagon. So now the question arises when will the bout take place? If things work out the way Nate wants them to, then there’s a high chance that he and Paul will duke it out by the end of the year.