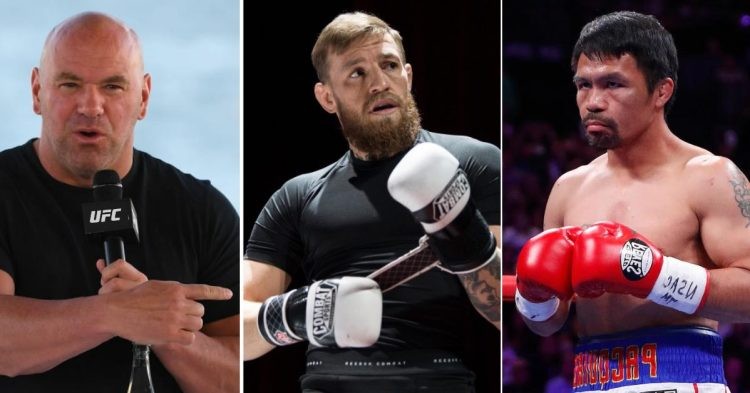 Dana White broke his silence over the recent online scuffle with former dual Champion Conor McGregor, after The Notorious claimed that Dana White is lying. After White declined having any information about the potential boxing showdown between Conor McGregor and former Champion Manny Pacquiao, Conor took to Twitter and claimed that White is lying, and he has legal papers to prove it. McGregor took to twitter and put out the following tweet. McGregor also hit back at White for lying about turning down fights, and leaked his private conversation with the UFC President where the former dual Champion can be seen offering multiple match-ups.

Code was broke when you lied about me turning down fights mate. I said Justin in May and you went and said I did not want to fight. It’s not about Diego. Diego was a filler to get more fights in.
Also you have been involved in Manny talks the legal letters are there.
Stop lying.

In a recent conversation with Barstool Sports, Dana White opened up about the entire situation and revealed that he hasn’t had any outside talk with McGregor. White stated that McGregor was lying about his boxing bout with Manny Pacquiao after Saudi Arabia declined any such event, and threatened to sue Conor McGregor if he doesn’t take the post down. The former dual Champion had  previously posted the poster for his boxing bout against Manny Pacquiao, however, he had to latter pull out his post due to the order from the Middleweight. Earlier, Dominance CEO Ali Abdelaziz had claimed that nobody in Saudi Arabia will agree to hold an event involving Conor McGregor due to his past remarks on Muslims and the religion in the lead up to his fight against Khabib Nurmagomedov back at UFC 229.

Dana White reacts on Conor McGregor calling him a liar

“Conor and I have not talked outside the public stuff. I don’t know if you saw, but the Saudis went after Conor. Basically they said you better take it down, it’s a lie.” White added, “You better take that down in fifteen minutes or we are gonna sue you.” White continued, “He took it down. You don’t see the poster anymore of him and Pacquiao.”

It’s not clear whether or not the boxing bout will take place. Earlier, McGregor’s manager had stated that the talks are on, and a verbal agreement has been reached with Manny Pacquiao. It remains to be seen what lies ahead for McGregor. White revealed that he has offered Dustin Poirier and McGregor a fight, and is waiting for the response.