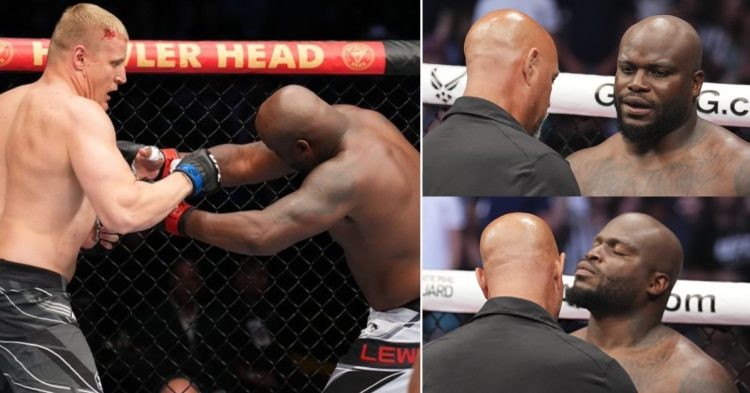 The hometown hero Derrick Lewis failed to show up once again as he fell short against fellow knockout artist Sergei Pavlovich at UFC 277 inside American Airlines Center in Dallas, Texas.

The loss marked Lewis‘ second straight stoppage, and third in his last four fights inside the UFC Octagon. However, Cormier wasn’t too pleased with how this fight was stopped and even the fans are calling it an early stoppage.

As referee Dan Miragliotta continues to take heat from both fans and fighters, UFC President Dana White has come out in support of Miragliotta. “To be fair, Miragliotta is a great ref. The way that he fell, probably nine out of ten people would have jumped on him and stopped the fight. Including me.” White said.

It’s hard to blame Dan Miragliotta for the call, and while it looked like an early stoppage, the manner in which Pavlovich was landing those powerful shots, it looked unlikely that Lewis would have recovered. Moreover, the way that he fell and stumbled backward on his feet pointed toward Lewis’ inability to respond to the barrage of punches.

Regardless, even White felt the stoppage was a little too early. “I think yeah, I think it was too soon.”

What’s next for Derrick Lewis after the stoppage loss at UFC 277?

There’s no denying Derrick Lewis still got the power in his hands. At 37 years of age, Lewis still has plenty of fight left in him. However, UFC will have to be smart in booking the next fight for the Black Beast.

Derrick Lewis is a huge name in the UFC and brings noise whenever he steps inside the Octagon. The loss against the #11 ranked Sergei Pavlovich definitely pushes him back in the rankings, but UFC will have to be smart not to book him against fighters ranked farther away from the top-10 spot.

While a rematch against Sergei Pavlovich should be on the cards, there are other exciting options for Derrick Lewis as well. Jairzinho Rozenstruik is an interesting match-up and is bound to get the attention of fight fans. Both are knockout strikers who like to put on a show for the fans.