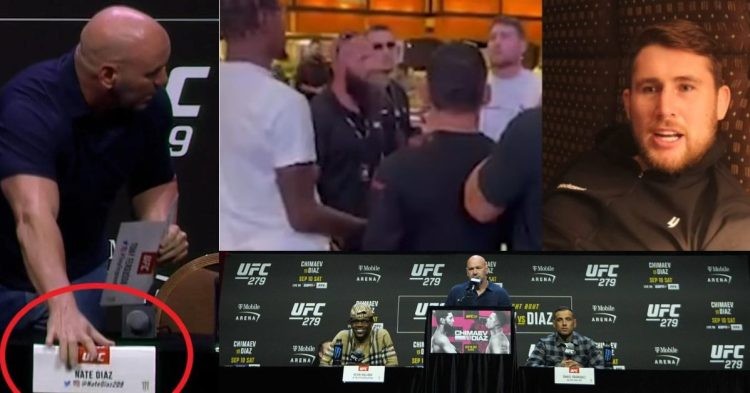 UFC 279 pre-fight press conference was a dead show after “hell broke loose” backstage moments before the event. On a rare occasion, UFC failed to deliver what was scheduled and advertised. People, to blame? Khamzat Chimaev and Kevin Holland. Maybe, Darren Till and Nate Diaz as well.

UFC 279 pre-fight press conference was canceled following a backstage brawl involving the likes of Khamzat Chimaev, Nate Diaz, Kevin Holland, and Darren Till among others. We will all head into the official weigh-ins without a presser, and it’s safe to say Nate Diaz’s final fight in the UFC has already become symbolic.

Is UFC 279 canceled after the pre-fight press conference brawl?

Speaking to the media after the whole incident, Dana White shared his thoughts on the backstage brawl.

“Diaz camp showed up with 57 people. Khamzat team had 30-something people and then you had multiple guys going back here. It was crazy, it was absolutely nuts back here.” White said. Speaking about whether it was a heated argument or a physical fight, here’s what the UFC President had to say.

“Very physical, there was lots of stuff going back there.” “I could see where this was going. You don’t have to be  a rocket scientist to figure out where this whole press conference was headed.”

“Now I have to start looking at you know uh, an event going off on Saturday if this, if this continues.” White hinted at the possibility of UFC 279 getting canceled because of the backstage brawl.

“Yeah so press conferences will obviously have, we’ll definitely definitely have more security.” He said about the future measures for any such incident that he described as something he has never seen. What instigated the entire thing?
“There were multiple things going on at the same time. It wasn’t just one thing that erupted and it happened, there were multiple thing going on back here at the same time.” “Once it all started erupting, it was a complete s*** show.”
“Couple guys jump up during the press conference and we handle it but uh never has anything broke out like it did today.” White also confirmed it was Khamzat Chimaev and Kevin Holland who instigated the whole thing. It’s funny how in a feud between Chimaev and Diaz, Holland is the fighter who became the reason for the entire brawl.

The rivalry between Kevin Holland and Khamzat Chimaev

Chimaev and Holland had repeated back and forth on social media and during the past week leading up to the day of the brawl. While nobody expected Chimaev and Diaz’s camp to go against each other looking at the amount of respect shown from Chimaev’s side, it is reported that even the Diaz camp got into the scuffle with “bottles flying” in the end.
Should Holland maintain his rise in the welterweight division, it’s safe to say, we might see Holland and Chimaev stand across each other inside the UFC Octagon in the near future.
As for now, UFC 279 will go on as scheduled where Khamzat Chimaev will take on Nate Diaz in a five-round headliner inside T-Mobile Arena in Las Vegas. In the co-main event of the evening, Tony Ferguson will make his welterweight debut in the UFC against Li Jinliang. Kevin Holland also takes on Daniel Rodriguez on the main card.
Tags: Dana WhiteDarren TillKevin HollandKhamzat ChimaevNate DiazUFC 279
Previous Post