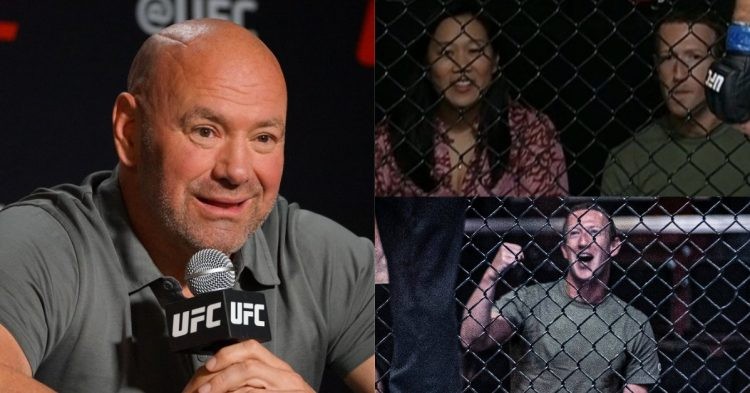 UFC Vegas 61: Dern vs Yan took place at the UFC Apex in Las Vegas under closed doors without any fans and media members. Dana White made this announcement one week ago and this decision caused a ruckus on social media as to what would be the reason behind UFC putting on a show closed for fans.

Strawweight contender Mackenzie Dern revealed in the pre-fight media interview that Facebook CEO Mark Zuckerberg had rented the entire arena to watch the event. However, UFC President Dana White was quick to shut down those comments during the media interview.

It appears that Dern was correct as Mark Zuckerberg was present cageside watching the prelims of UFC Vegas 61 with his wife. The Facebook CEO enjoyed a lot while watching fights and looking at the action during one of the matchups, Mark got up to his feet and started applauding.

From his reactions, it is needless to say that Zuckerberg had a great time watching the event. He thanked Dana White on Instagram for inviting him to the fight night event and posted a picture with headliner Mackenzie Dern.

After Dana White confidently refuted claims about Mark Zuckerberg renting out the Apex for the UFC Vegas 61: Dern vs Yan event, it would be interesting to see what his response would be after the Facebook CEO was present in the arena alongside his wife for the event.

Here’s the thing with Dana White. Whenever there is some rumour and it makes him angry and he denies it you can guarantee it’s true #UFCVegas61 pic.twitter.com/cugoP3qLax

Zuckerberg is present, so it sounds like @danawhite was lying out his ass per usual.

Dana White’s defense is going to be that Zuckerberg didn’t rent the place, but that the UFC willingly barred fans and media for him gratis. #UFCVegas61

It is needless to say that fight fans were annoyed with the UFC President lying and consequently, they have expressed their frustration on social media. These were some of the tweets from fight fans reacting to Mark Zuckerberg attending the UFC Fight Night event.

Do let us know your thoughts in the comments section below about UFC keeping a secret about why fans were not allowed to watch UFC Vegas 61 at the Apex.