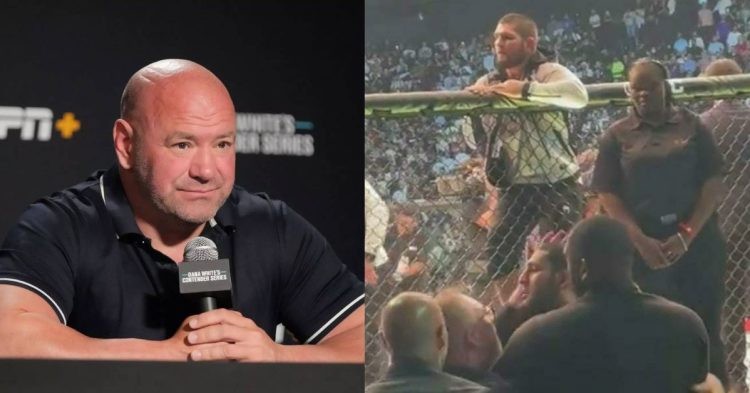 The UFC security separated Khamzat Chimaev and Makhachev’s teammates before the altercation could escalate to another huge brawl.

It is to be noted that Khamzat Chimaev and his team got into a heated brawl with Nate Diaz and Kevin Holland backstage at UFC 279. It forced Dana White to cancel the UFC 279 press conference. And fans saw the biggest brawl in the company’s history thanks to Broz.

Now the reason behind the altercation between Chimaev and Makhachev’s teammate is still unknown. But, in the video, it’s can be seen that Khabib Nurmagomedov was concerned about what was happening between his teammates and Chimaev in the cage side.

UFC president, Dana White addressed the brawl between Chimaev and Makhachev’s teammates in the post-fight press conference of UFC 280.

Dana White looked unaware of the reason behind the brawl as he stated:

“He was sitting on our side. I did not even know Khamzat was coming tonight. He was invited here by Abu Dhabi. So the seats behind me are owned by Abu Dhabi.”

So far there has not been any response from Khamzat Chimaev or Islam Makhachev regarding this situation.

Recently, Dana White talked about who should Chimaev fight next after his win against Kevin Holland. There are still some doubts around Chimaev making weight for welterweight after he missed weight at UFC 279.

Chimaev’s coach even said that Borz will move upto middleweight for his next fight. However, it seems Dana White wants Khamzat Chimaev in the welterweight division as he is planning to book Chimaev vs Covington next.

In an interview with Maclife, Dana White said he wants to book Khamzat Chimaev vs Colby Covington in the co-main event of Kamaru Usman vs Leon Edwards 3.