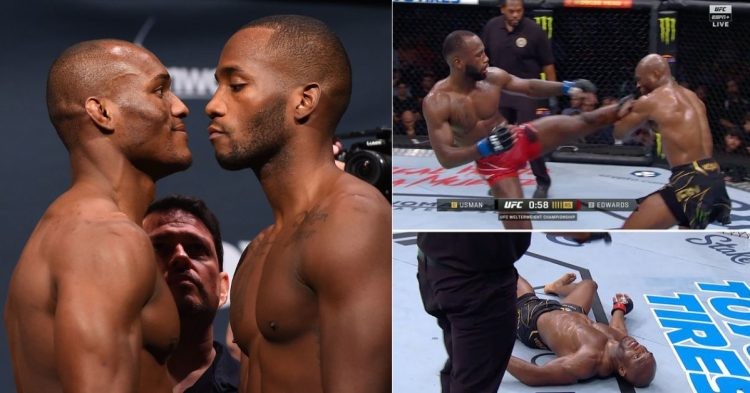 Leon Edwards put the entire MMA community on notice after he knocked Kamaru Usman out cold at UFC 278 to become the new UFC welterweight champion of the world. Needless to say, talks of a potential trilogy fight shot up as soon as the fight got over, and now UFC President Dana White has confirmed that a trilogy fight is a certainty and he would like it to be in Wembley, London.

Earlier as well, Dana White had confirmed that should Leon Edwards pick the win over Kamaru Usman, a trilogy fight is a guaranteed deal. Usman was the heavy favorite going into this fight, and who would have thought Leon Edwards would stop Kamaru Usman in the manner that he did at UFC 278?

“How do you not? Wembley.” White said when asked about a potential trilogy fight between Leon Edwards and Kamaru Usman.

Leon Edwards vs Kamaru Usman 3 in London is absolute fireworks

The UK crowd is always a treat to fight fans around the world. And when they have a British fighter to root for, one can only imagine the noise that the crowd can make. Coming off a KO win over Kamaru Usman, it’s safe to say that the fans will completely takeover Wembley when Leon Edwards walks out to the Octagon to defend his welterweight gold.

You add Paddy Pimblett, Molly McCann, and Darren Till to the mix, and we have a card for the ages for British fans. Considering Usman suffered a knockout loss, it will be some time before we see both the fighters step inside the Octagon once again.

Additionally, it means Khamzat Chimaev will have to wait even if he gets past Nate Diaz later this month at UFC 279. Earlier, there were reports going around that the UFC will look to book Kamaru Usman vs Khamzat Chimaev next should both the fighters emerge victoriously. While Usman has now succumbed to his first loss in 15 fights, it will be interesting to see what goes down in Khamzat Chimaev vs Nate Diaz next.