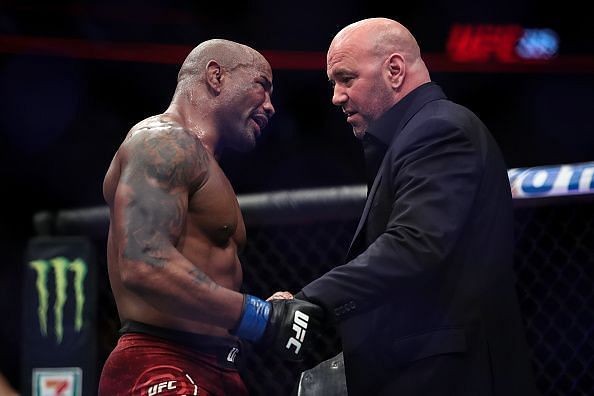 In the past year, there are some UFC releases that shocked the MMA world. UFC released the former UFC heavyweight champion, Junior Dos Santos, heavyweight veteran, Alistair Overeem, and many more. However, the release of Yeol Romero was certainly the most surprising one.

Yoel Romero is undoubtedly one of the most exciting fighters to watch. His insane physique, athleticism, explosiveness, and vicious KO power make him a fan favorite every time he enters the octagon.

Yoel Romero was on a three-fight losing streak before he was cut from the UFC roster. In his last fight, he lost to the current middleweight champion, Israel Adesanya via a split decision.

And prior to that, he lost to Paulo Costa and Robert Whittaker in two closely contested matchups. Though Romero was on a losing streak he was fighting the very best of the division and losing the fights by a small margin.

Even despite the losses, Yoel Romero can be a nightmare matchup for many of the current top 10 UFC middleweights. And that’s why fans found it surprising when Dana White decided to release the Soldier of God.

Though Yoel Romero was an exciting talent in the UFC middleweight division there were a few blemishes on his UFC career.

Yoel Romero fought for the UFC middleweight title fight on multiple occasions. However, he was unable to capture the UFC gold as he lost to Robert Whittaker and Israel Adesanya.

Besides that, Romero’s last fight against Israel Adesanya was a lackluster performance from the Soldier of God. And UFC president, Dana White seemed extremely unpleasant following Romero’s low output and lack of urgency in the fight against Adesanya.

Nevertheless, the fans can watch the Soldier of God compete inside the MMA ring in Bellator as he takes on Phil Davis at Bellator 266 on his promotional debut.