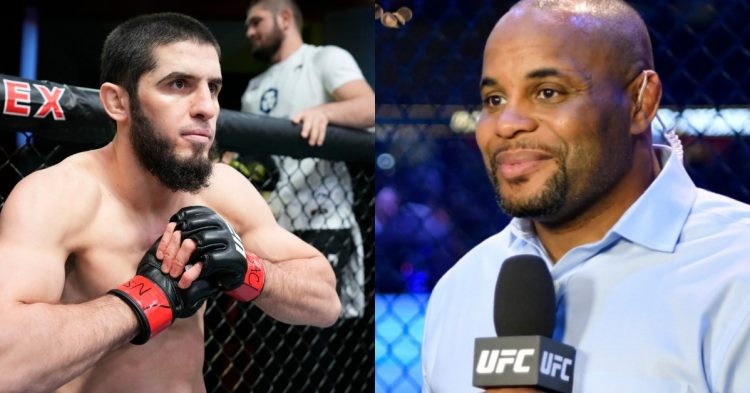 Daniel Cormier will travel to Dagestan to train Islam Makhachev. (Images via Twitter)

Islam Makhachev is gearing up for the biggest fight of his career. He is scheduled to face Charles Oliveira at UFC 280 on October 22nd. The winner of the bout will be crowned as the new UFC Lightweight Champion.

In a recent appearance on ‘DC & RC’, hosted by Islam’s teammate Daniel Cormier, Makhachev revealed that he will not hold the fight camp in the USA.

Along with his cousin Khabib Nurmagomedov, Islam trains at AKA (American Kickboxing Academy) which is based out of San Jose, California. But due to the fight taking place in UAE, Makhachev will train back in his home country, Dagestan.

It seemed like it came as a surprise to DC who was not aware of the whereabouts of Islam’s camp. But Makhachev did not want to hold the camp without the presence of his gym captain.

“Hey DC, we have before all my fights like training camp together. You gonna come to Dagestan, help me a little bit?”

The former UFC Heavyweight and Light Heavyweight Champion did not refuse Islam and promised to fly out to Dagestan to help out his friend.

What gameplan should Islam Makhachev have against Charles Oliveira at UFC 280?

Khabib Nurmagomedov, the greatest lightweight fighter to ever grace the Octagon, has called the bout between Makhachev and Oliveira a dream fight. So the expectations for this fight to deliver are massive and both fighters will give it their all to prove that they are indeed the best grapplers in the division.

It really is a clash of styles between Makhachev and Oliveria. Oliveira is a master of Jiu-Jitsu whereas Makhachev’s sambo/wrestling skills are unmatched in the division. So what will be Makhachev’s game plan against a grappler of Oliveira’s level? Let’s find out.

Despite not wanting to use his striking much, Makhachev has a lot of power behind his punches. As the fans know, there are massive question marks over Do Bronx‘s chin. So the first option is to land a big punch which puts Oliveira out on his feet. But Charles tends to survive the knockdowns and use that as an opportunity to invite his opponents into his guard.

The second option is to try the same the gameplan that GSP had against Nick Diaz. Diaz’s BJJ skills are legendary. But George St-Pierre successfully shut it down by maintaining a steady control inside the guard. If Islam can maintain the top position without letting Charles have the room to free his arms, a decision victory does not seem out of the realm of possibility.

But as Islam’s former teammate Josh Thomson pointed out, Islam will have to be incredibly careful before shooting for a takedown. Any wrong move or careless position will end in an instant submission win for the Brazilian.

How do you see the fight playing out between Islam Makhachev and Oiveira? Can Islam avoid submission attempts from Charles Oliveira? What should Islam’s game plan be for the fight? Let us know in the comments below.