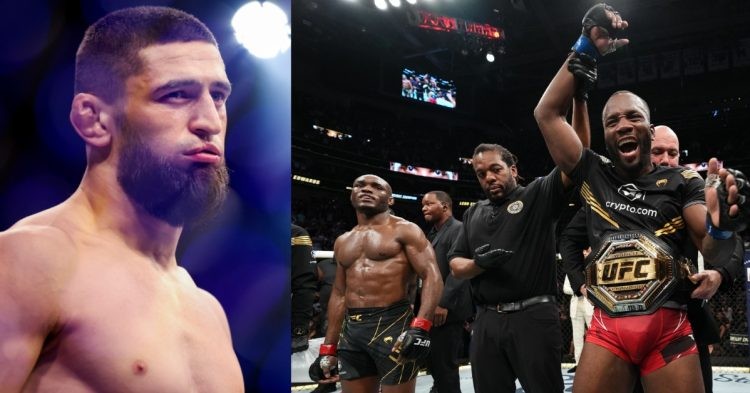 Khamzat Chimaev is set to headline the very first Pay Per View (PPV) of his UFC career next month. He will fight Nate Diaz at UFC 279 on September 10th. Although Chimaev’s star is shining brighter than it has ever had, Daniel Cormier has an interesting take on him. DC thinks UFC will give the next title shot to Kamaru Usman ahead of Chimaev.

The after-effects of UFC 278 are still fresh in the fans’ minds. The UFC welterweight champ Leon Edwards seemingly accomplished the impossible on August 20th in Salt Lake City. After being dominated for the major part of the 5 rounds, Leon pulled off a stunning win as he knocked out Usman with only 56 seconds left on the clock.

Although the result gave the 170lbs division a much-needed boost of life, former UFC double champ Daniel Cormier thinks it was the worst possible outcome for Chimaev. He had a great observation of the situation during a recent video on his YouTube channel.

“I think last weekend he did not understand that he was the biggest loser in the Usman versus Leon situation because he was in line. All he had to do was get past Diaz. All he had to do, get past Diaz, you fight for the championship, but with Leon Edwards winning now, now we got a trilogy and rightfully so.” (h/t via SportsKeeda)

DC’s points are valid as Edwards vs Usman 3 seems like the next title fight for the division. Cormier made the same observation during the UFC 278 broadcast. Kamaru has been a great champion who was only a few seconds away from retaining the belt. Usman had 5 successive title defences before losing against Usman. So the rematch seems like an automatic next move.

Hence. it delays Khamzat’s chances of fighting for the belt. Before UFC 278, Dana White seemed to hint that Chimaev will get the next shot if both Usman and Khamzat emerged victorious in their fights. But Usman’s loss has obviously delayed those plans.

Kamaru Usman is looking to get back to action as soon as possible. Following his defeat, Kamaru was very complimentary of Leon Edwards. But he also sounded excited to face Leon again in the rubber match. Even the UFC President stated that a rematch completely makes sense and hinted that he was looking to take the event to the UK.

The trilogy fight between The Nigerian Nightmare and Rocky has the potential to be absolutely massive. Despite the win, Leon stated that it was one of the worst performances of his life. So it is only natural to expect him to be better the next time they fight. Usman will also have the time to rectify the mistakes that cost him the fight.

Who would you favour in the rematch? Do you think Leon Edwards‘ win was a fluke at UFC 278? Or do you think it is impossible for Kamaru Usman to recover from the KO loss? Let us know in the comments down below.