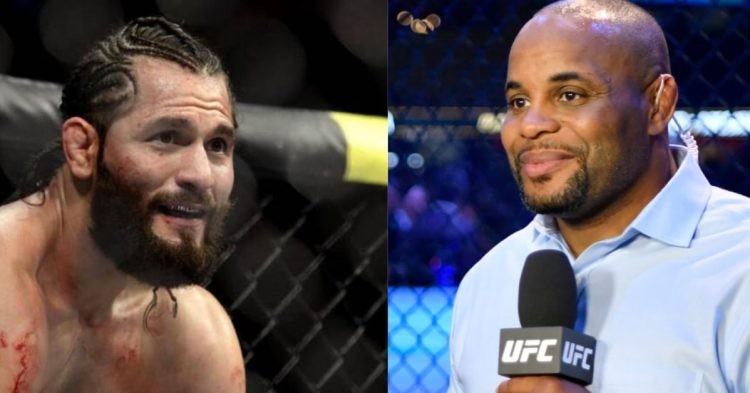 History was made at UFC 278 as Leon Edwards knocked out the former P4P king, Kamaru Usman, to capture the welterweight belt. Although an immediate rematch seems like the next logical step, there are contenders to challenge Leon next and Jorge Masvidal is one of them. But the former UFC double champ Daniel Cormier does not think Leon should give him the opportunity.

According to DC, Leon should get his revenge and not mention Jorge’s name even once. Understandably so, it did not go down well with Gamebred. Jorge tweeted that he will become the 170lbs champ shortly after Leon’s win over Usman. Once he got wind of DC’s comments on him getting a title shot against Leon, Jorge spoke up.

He accused Cormier of being jealous because Jorge refused to do an interview with him. The Street Jesus thinks a fight between him and Rocky will be the biggest one in the welterweight division.

2/2 you to promote the biggest fight the current champ can make in the division which is me, wear your best suit from DXL and make sure you do as your told like a good boy. Maybe you’ll get a treat from your master #reasonpeoplewatchonmute #fakelifecoach #brokeadvice

But Daniel Cormier does not think Jorge was the person behind the tweets. Instead, he predicts that Masvidal’s manager Malki Kawa is the author of the tweets. Managers often have the access to their fighter’s social media pages. For example, Ali Abdelaziz is infamous for posting messages from his fighters’ accounts.

So it all makes sense. DC also advised Jorge to fight Gilbert Burns next, as a win over Durinho will make Jorge’s case for another title shot much stronger.

Jorge you’ve always been the man, Malik stay off his page. I stand by what I said. You don’t get unlimited title fights Malki, beat Durinho get to 1-3 in last 4 and maybe get a title shot. See Malki now you got me disrespecting my friend Jorge 😊 https://t.co/DLJjIfIOUJ

The 43-year-old pointed out that Masvidal has lost all of his last 3 fights. Two of the three losses came against Usman for the belt and his last loss was against Colby Covington at UFC 272. So, a title shot off 3 losses is not something that the UFC will grant. So DC’s advice for Masvidal is more than valid.

How did the rivalry between Jorge Masvidal and Leon Edwards start?

The rivalry between Jorge Masvidal and Leon Edwards is not a recent one. It originated in 2019 when Jorge and Leon crossed paths backstage during UFC Fight Night: Till vs Masvidal. Masvidal KO’ed Darren Till in the main event of the night, whereas Leon got a split decision win against Gunnar Nelson.

After the bout, Masvidal was doing an interview when Leon was passing him by. During that, Edwards stated that he would like to fight him next in the Octagon. Jorge acknowledged the comment and walked up to Leon. The British fighter also got in Jorge’s face and it prompted the latter to sucker punch the former. It was where the famous line “three-piece with a soda” originated.

Since then, there have been rumours of them fighting.

But the UFC took advantage of Jorge’s popularity following the incident and put him in the biggest fights available. Although they were matched up to fight at UFC 269, Jorge withdrew because of an injury. But there is an opportunity for the company to make the fight now. Will the UFC do it? Only time will tell.