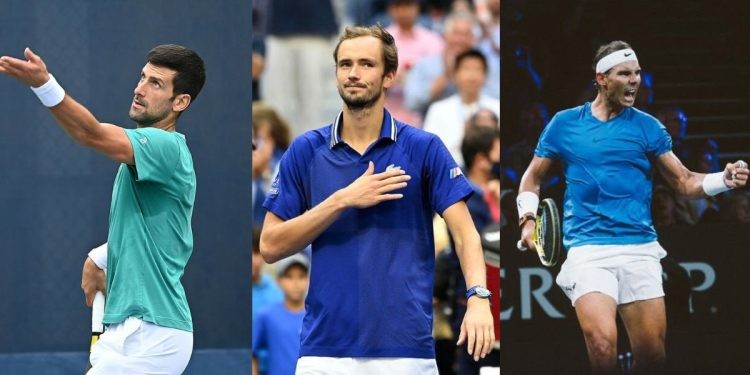 Daniil Medvedev will be the biggest name missing from the list of players participating in Wimbledon 2022. The reason for his non-participation is not some serious injury. Due to the ongoing Russia-Ukraine war, Wimbledon has banned players from Russia and Belarus from participating in the tournament.

In a recent interview, the world number one was asked about who is the favorite to win the Wimbledon this year. Without any hesitation, Medvedev picked Novak Djokovic as the undoubted favorite for the event. Djokovic has won the tournament eight times in the past. Interestingly, Medvedev beat Djokovic in the US Open to clinch his maiden grand slam last year.

‘If we talk about the best players in history on grass, I would place Novak Djokovic at the top…’https://t.co/mFlbPDuLsU

Medvedev’s reply came as a little surprise considering Djokovic has not been in good form this season. On the other hand, Rafael Nadal has won both the grand slams this year. However, the question was a no-brainer for the defending US Open winner who snubbed Nadal and picked Djokovic.

The Russian further explained, “Novak is always the favorite. He has won the last three Wimbledons that have been played. He plays very well on grass. If we talk about the best players in history on grass, I would place him at the top, although I have not seen Borg or Sampras play.”

Medvedev has followed the performance of the top players and two players stand out. Nadal is obviously the first name who is in the form of his life barring his foot injury. If he is in shape, it will be very difficult to stop him from winning the tournament. Nadal claimed his 21st grand slam by beating Medvedev in the Australian Open final this year.

The second name is Matteo Berrettini. The Italian was off the court this season for a really long time due to an injury. He even had to undergo surgery to fully recover from the injury. Berrettini returned for the grass season and won back-to-back ATP events by winning the Stuttgart Open and the Queen’s Club Championships.

While talking about favorites other than Djokovic, Medvedev said, “Of course, Nadal can win any tournament he plays in and Berrettini is playing at a high level. Speaking of favorites, Djokovic, Berrettini, and Nadal.” Wimbledon is just one week away and players are busy practicing before the big event.