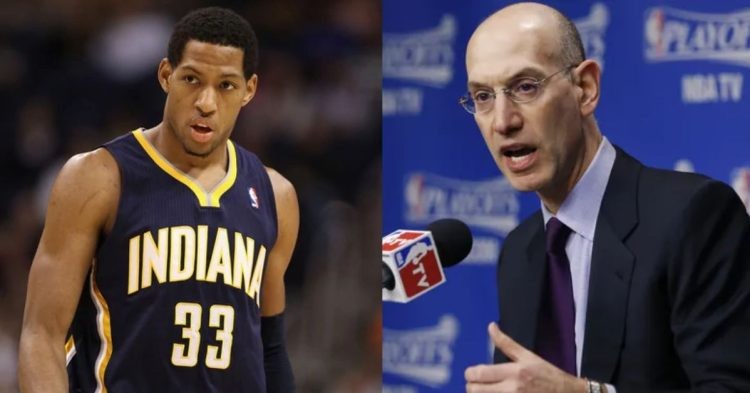 Former NBA player turned Jehovah’s witness, Danny Granger has become a popular name in recent times. This is largely due to the fact that his ex-girlfriend Brittany Schmitt, a comedian, referenced him indirectly during one of her acts. Backlash and negative attention have been thrust on the former player as a result of this.

Not many fans are aware of how Granger performed during his time in the league. He is best known for his time with the Indiana Pacers and Los Angeles Clippers. Back in 2012, Danny was fined $25,000 by the league. One may wonder what he did back then. Thus, it is important to look back on this incident. Especially, now that he is in the limelight yet again.

The Milwaukee Bucks and Indiana Pacers faced off for a regular season game in 2012. This was all the way back when LeBron James was with the Miami Heat and Paul George was the cornerstone for the Pacers.

Tensions escalated on both sides toward the end of the game. Larry Sanders, a Bucks forward was fighting to establish position with less than 4 minutes left in the game. He decided to run through a crowded lane and floor Danny Granger, who tried to set a screen on him to give his teammates space.

Sanders, who appeared to be in the wrong did not look the slightest bit sorry. He went on to escalate the situation and even make an attempt at poking David West in the face. Both sides seemed to want to turn this into a fight instantly. However, nothing of the sort happened as officials managed to get between them in time. Thus, it all concluded with a heated exchange of words as Larry was ejected from the game.

He went on to receive a two-game suspension as a result of these actions. Moreover, the league also decided to fine Danny Granger and David West for “instigating and adding to the escalation.” We can understand the logic behind holding both sides accountable. Be that as it may, Granger felt he did nothing wrong and did not deserve the fine.

My Bday is today but sadly I just found out I got fined 25k by the NBA!!! I don’t even kno what to say….ummmm #speechless

A lot of time has passed since then and this incident remained forgotten. Sanders’ career never really recovered from this hit and he is a former player now, just like Granger.