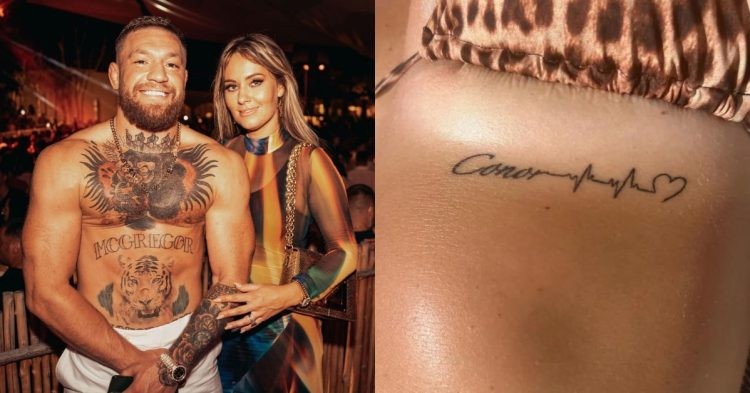 Conor McGregor and Dee Devlin are one of the most famous couples in UFC history. At every step of Conor’s career, Dee has been there for him in his corner. In a recent Instagram post, Dee showed off a new tattoo that she got of Conor just below her left breast.

McGregor himself is no stranger to tattoos. His inks are some of the most recognizable ones in the world of MMA at the moment. But now his partner has also joined him as Dee inked Conor’s name on her body. The tattoo of Conor’s name is followed by some heartbeats and a love sign at the end. Conor himself was present during the process.

Conor and Dee have been dating for over 15 years now. The couple also has 3 beautiful children, Conor Jr, Croia and their youngest son Rian. Although McGregor and Devlin are not married yet, it does look like they are truly enjoying each other’s company and are set to spend the rest of their lives together.

Conor McGregor recently uploaded a video where he and Dee were getting intimate. It seemed like they were on top of his luxury Lamborghini yacht and the couple decided to engage in some sexual activity. Although it does not seem like he intended to post the video, Conor filmed the moment. Fortunately, Dee’s face was not visible in the footage.

Conor later realized that the footage was up on his Instagram account and took it down. However, it was on air for long enough for millions of fans to see. The video generated some interesting reactions from the fans. Although some thought it was an alpha move, another portion of the fans expressed that posting the footage was a bad move.

The footage being public certainly was not a good look for the fighter. Conor is yet to be on the fans’ good books after a lot of recent controversies. Hence, the video did nothing to bring McGregor’s goodwill back in the eyes of the fans.

But Conor has had some success in his professional life. He will make his Hollywood debut opposite Jake Gyllenhaal in a leading role. The Notorious One is also expected to come back to the UFC Octagon early next year in 2023, his manager confirmed the news.