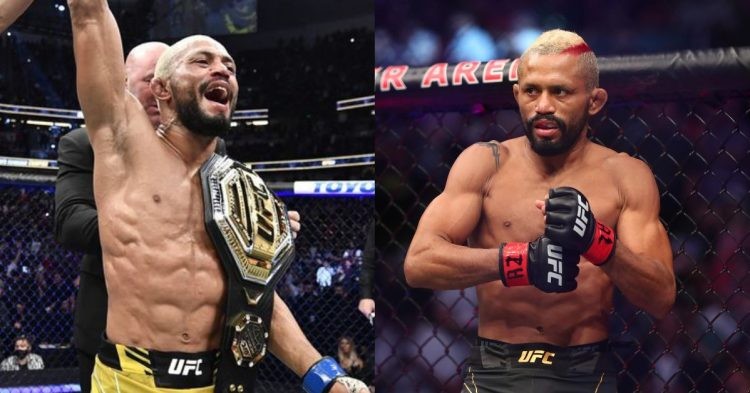 Currently, Deiveson Figueiredo is the champion in the UFC’s Men’s Flyweight division. Also known as, “Deus Da Garra”, he is regarded as one of the best-ever fighters in the history of his division.

After making a solid start, Figueiredo (21-2-1) gradually made his way to the top of the division. As such, Figueiredo has beaten some big names like Alexandre Pantoja, Joseph Benavidez, and Brandon Moreno to solidify his spot at the top. Although he lost to Jussier Formiga early on, he has since gone on a devastating run.

Previously, Figueiredo lost his title to Moreno at UFC 263, but has since won it back, and will be looking to keep it that way. Taking his nickname quite literally the “God of War”, makes every one of his fights worth watching.

Known for his stamina, aggression, and devastating striking, Figgy has made good money from his UFC fights. As such, let’s examine Deiveson Figueiredo’s UFC career earnings through salary, purse, payouts, bonuses, and incentive pay.

Following that, Figueiredo fought for the belt against Joseph Benavidez in 2020, making $125,000. In the rematch fight four months later, Deiveson made $230,000. Then, against Alex Perez, Figueredo made his biggest payday, banking $490,000 for the fight.

According to records, Deiveson has only lost twice in his MMA career. Most notably, Deveison’s biggest loss came against Brandon Moreno at UFC 263, a rematch of their UFC 256 draw. With a fourth fight at UFC 283 imminent, Figueiredo will be looking to settle the tie, once and for all.

UFC Flyweight champions have been known to get the short end of the stick when it comes to their pay. One of the most dominant champions, Demetrious Johnson has recently revealed his ridiculously low pay. According to Johnson himself, he was being paid a measly $20-30,000 during his reign as champion.

Similarly, Deiveson has also become a victim of very low pay, especially for a champion. Ever since the Perez fight, Figgy’s fight purses have taken a big hit. As such, he made only $295,000, and $252,000 against Brandon Moreno at UFC 256, and UFC 263 respectively. According to sources, Figueiredo only pocketed a shocking $150,000 for his win against Moreno at UFC 270.

During the same event, heavyweights Francis Ngannou and Ciryl Gane pocketed around $600,000 and $500,000, (excluding bonuses). For the most part, UFC Champions make somewhere between $100- 300,000 as their base pay. Moreover, they are likely to get sponsorships, PPV points, and other bonuses on top of it as well.

Speaking about his compensation, the Brazilian has been left disappointed in the past. Thus, ahead of UFC 283, Figueiredo has employed the services of UFC Hall of Famer Urijah Faber. As such, Figgy will be hoping that Faber can “fight hard” to negotiate and secure a much-deserved raise for his next fight.

Will Deiveson Figueiredo finally get the pay he deserves? Where do you rank the God of War among the current UFC champions? Leave your thoughts in the comments below.