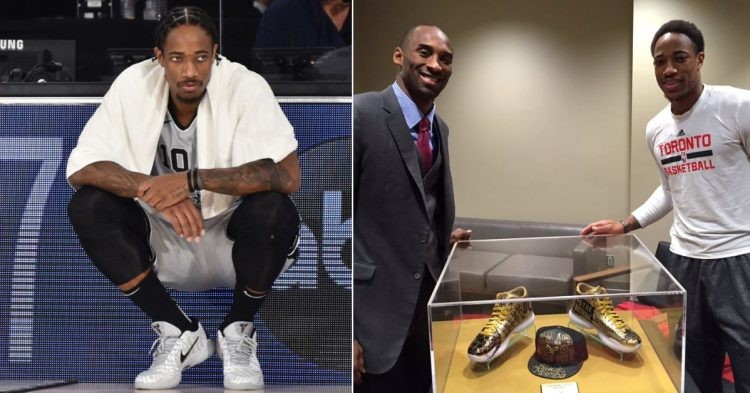 DeMar DeRozan and Kobe Bryant are the face of Nike (Credit: NBA)

DeMar DeRozan is an NBA star and veteran who has been in the league for 13 years now. He is currently with the Chicago Bulls and is responsible for their success in the 2021-2022 season. They managed to make the Eastern Conference playoffs but were eliminated by Giannis Antetokounmpo and the Milwaukee Bucks. Owing to his incredible performance this season, he has signed a new 4-year contract with Nike.

Everyone knows how endorsements help with the success of the athlete. They are a source of income as great as professional NBA contracts if not greater. Reports show that Nike is interested in making DeRozan the featured face of the “Kobe Bryant Sneaker Line“.

We couldn’t let @kobebryant leave without a token of our appreciation. A @Raptors gift for one of the GOATs. #Kobe20 pic.twitter.com/PIZJz2iLxZ

This decision has brought on differing reactions. Some believe it is long due, while others think he has not done enough over his career to deserve carrying on the black mamba’s shoe line. It is important to understand the variables that went into making this decision.

Avid NBA fans know that 2016 was one of the best years the league has seen in recent times. It saw the greatest NBA Finals win as LeBron James, Kyrie Irving and the Cleveland Cavaliers came back from a 3-1deficit against Steph Curry and the Golden State Warriors.

Additionally, this was also the year that the late Kobe Bryant retired from basketball. Both these events created their own ripples in the league.

We couldn’t let @kobebryant leave without a token of our appreciation. A @Raptors gift for one of the GOATs. #Kobe20 pic.twitter.com/PIZJz2iLxZ

We all know how Kevin Durant soon joined the Warriors to tile the scales and help them win titles. However, not many of us know what struggles Nike went through when their franchise face chose to retire after 20 years in the league. Kobe’s untimely passing also further complicated the situation as Nike could not come to a deal with Vanessa Bryant and the estate regarding a contract extension and continued production of the shoes.

DeMar DeRozan seemed to be the perfect solution to all these problems. He was quite close with Kobe Bryant and frequently sported a pair of Kobe’s when playing NBA games. Additionally, Kobe even joked with him about wearing his own shoes against him. DeMar has been collecting custom, rare, and even unreleased versions of Bryant’s signature shoe.

NBA analysts will have their own opinions. Yet DeRozan’s game is also considered quite similar to Kobe’s. Both are considered masters of the midrange shot. This seems to be a lost art in the modern NBA as “three-pointer or layup” seems to be the conventional strategy league coaches seem to enforce.

All these reasons put together, along with his innate love for the shoe line are the reasons he has signed this contract and is now the face of the Kobe Bryant shoe line.